Notes on FormIt and its API, the new automatically generated RevitLookup installer asset, transformations and quaternions:

Kean Walmsley took a closer look at FormIt and its JavaScript API and describes in detail how to get started with FormIt plugins.

That prompted Radu @radugidei Gidei to mention the Matterlab FormIt plugin making use of this to provide geographical context in Revit;

Nice one and great intro to FormIt API! Look forward to the VASA integration, sounds very cool! Btw, some of our team are working on some FormIt stuff as we speak, some cool things coming for the community! (cough docs cough)

Thanks to Kean and Radu for sharing these!

Yet another update to RevitLookup brings us to release 2022.0.2.5, adding automatic generation of a release for the master branch and attaching the completed installer as an asset to the release: 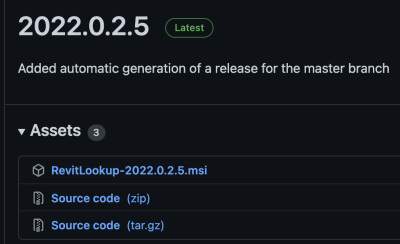 This is the result of pull request #118 to release by GitAction, including an intensive and very instructive conversation between Roman @Nice3point and Luiz Henrique @ricaun Cassettari on how to optimally set it up, and a renewed summary by Roman on how to handle future pull requests:

Once again, I will repeat the steps that you must take to publish:

Many thanks to Luiz Henrique and Roman for their deep discussion, insight and implementation!

In the Revit API discussion forum thread on getting translation and rotation for a FamilyInstance, Matthew mhannonQ65N2 Hannon shares a very nice and succinct explanation of quaternions and how they relate to Revit transformations:

For rotations, what you are trying to do is transform between two different representations of the 3d rotation group (aka the Special Orthogonal group of dimension 3, SO(3)). Revit provides rotations in the form of a 3x3 matrix whose three columns are the BasisX, BasisY, and BasisZ properties of Transform. This rotates vectors by standard matrix multiplication.

If you don't know the axis and angle but only have the rotation matrix (i.e. a Revit Transform), there are algorithms for converting from a 3d rotation matrix to a quaternion, though I won't go into any here. Alternatively, it looks like in the latest version of SharpGLTF, AffineTransform has a constructor that takes a 4x4 matrix. To make such a matrix from a Revit Transform, the first 3 columns should be the BasisX, BasisY, and BasisZ of the Transform, with the fourth member of the column being zero, and the last column should be the Transform's origin, with the fourth member of the column being one.

Many thanks to Matthew for this very nice overview!