Before diving into these topics, a nice quote of the week from Quincy Larson's freecodecamp newsletter:

There are only two kinds of programming languages: the ones people complain about and the ones nobody uses.

A careful analysis by Richard in the thread on GetTransform does not include reflection into the transformation clarifies the effects of rotation and reflection achieved by mirroring and flipping on the BIM element transform:

Question: The Instance.GetTransform method does not include reflection, e.g., the family mirrored property into its transformation. Below a family instance which is mirrored and outputs the equivalent GetTansform values: 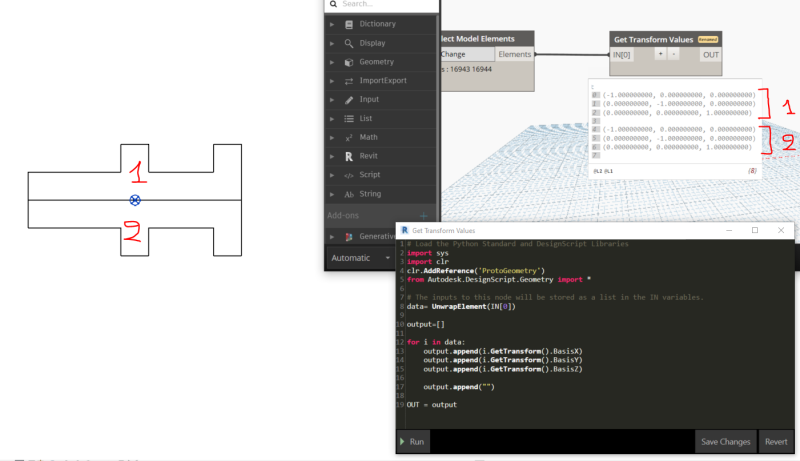 Here is the python code:

That is expected and intentional in Revit. 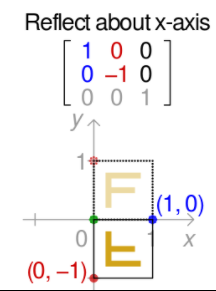 Can you please share any explanation and why this intentional for Revit?

Answer: I found results that indicate Revit uses a combination of reflection and rotation for the various mirror and flip operations:

One thing that stands out is the difference between horizontal double flip control and mirror command about same axis (noted red). These operations are almost identical apart from the horizontal one that results in opposite facing and handed state. Graphically, it appears the same, but not according to facing/handed orientation.

It has been noted previously that single flip control is more like rotating rather than mirroring (it doesn't result in reflected geometry). We see by transform that it is reflected but facing/handed state is also set to true.

Generally, I think of the facing/handed state as being an internal to the family state, i.e., the internal geometry may be reflected but the family itself isn't (unless it is by transform).

You probably need to look at flip state/rotation and transform to get a definitive idea of the situation. These controls long ago I believe were introduced for doors, which side they are hung and swing direction. As they started being used for other things, the ambiguities crept in, i.e., double negative (same ultimate representation but two definitions for it).

I think everyone has probably fallen foul of these geometric aspects at some point. I recall we had a pile cap with four piles and we marked one of the corners so that we could identify the edges numerically in a clockwise order around this square cap (which had double symmetry). The idea was that we would have a table of parameters which noted the edge distances (edge of cap to edge of pile). What we didn't count on was the fact sometimes people mirrored these caps, so although the corner marker flipped from one side to the other as expected the numbering of edges was no longer clockwise. So, numbered edge distances in table didn't correspond with what was counted clockwise from corner marker.

The question is why would someone mirror a symmetrical object? The answer was that this cap was one of many and there was a line of symmetry across the site. Therefore, they had filled half the site with pile caps and mirrored them for completion (perfectly acceptable). An important lesson from this is that the flip state of the symmetrical object was a hidden feature with subtle implications (when identifying parametric relationships).

Many thanks to Richard for this very helpful explanation!

Back in 2018, the development team clearly stated that the interesting-looking Document.MakeTransientElements method is 'half-finished' work that should not have been exposed to the public API and will probably be removed again.

It has not been removed yet, though, so Moustafa Khalil and Richard discussed a hacky approach to make it do something at all in the Revit API discussion forum thread on Document.MakeTransientElements, in case you are interested in taking a further look yourself.

Just for the sake of completeness, some other officially supported approaches to display non-BIM-geometry include AVF, DirectContext3D and, new in Revit 2022, the temporary incanvas graphics API (below).

Here are some AVF samples:

I have not explored the direct context 3D functionality myself yet, but here are some bits and pieces on that:

I created a video on the awesome new Temporary InCanvas Graphics API. That raises a question on the image colours. As you can see, they are... off... What are the rules the images, and colours, we can use in this feature? ...

Many thanks to Bobby for this nice introduction!

Finally, some further useful clarification by Richard on shared versus non-shared parameters, their use and creation in the Revit API discussion forum thread on creating project parameter (not shared parameter).

This new functionality obviously enables the Forge Design Automation API for Revit 2022 now to support exporting to PDF directly, as documented by my colleague Zhong Wu.

Thanks to Zhong for testing and pointing this out.