Two weeks ago, we mentioned the Revit 2021.1 update release.

Here are some notes on that, together with an online copy of the information from its What's New section:

Please note that the updated SDK (Software Developer's Kit) for the Revit 2021.1 update release is now available for download from the Revit developer centre. 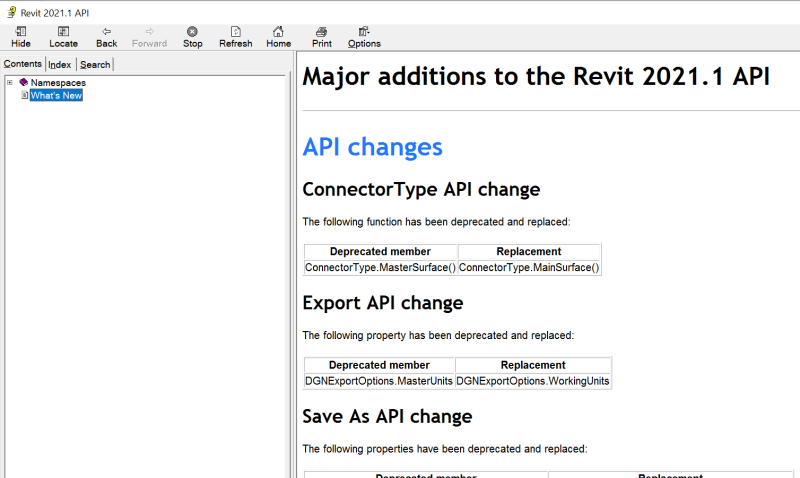 For convenient, easy and effective web searching, this blog post provides an online version of that information.

The What's New section and the Changes and Additions document provide important information, both for discovering and exploring the newly added API functionality and for later reference.

If you encounter any issues migrating your existing add-ins between different versions, this is one of the first places to look.

For detailed information on all other aspects of the Revit API, please refer to the rest of the API documentation and samples provided in the SDK.

The most important things to install and always keep at hand are:

You will need both of these regularly for research on how to solve specific Revit API programming tasks.

Here are links to previous discussions of What's New in the Revit API:

Before we get deeper into the API changes and additions, a short clarification on the terminology used.

Question: What does the below statement “deprecation/replacement” mean?

We should keep the compatibility for API, right??

Is this just an update to the SDK/documentation?

In several fields, deprecation is the discouragement of use of some terminology, feature, design, or practice, typically because it has been superseded or is no longer considered efficient or safe, without completely removing it or prohibiting its use.

It can also imply that a feature, design, or practice will be removed or discontinued entirely in the future.

It is not gone, not worthless.

Using it may produce a warning message during compilation, but it will still work.

Response: But note says 'replaced'. If so, the same code won’t work. Then, it’s a breaking change.

Answer: It does not say 'replaced', but 'replacement'.

There is a subtle and significant difference between these two terms.

The former 'replaced' means that is has been replaced and is hence no longer available.

In that case, the method would not be marked as deprecated, but as obsolete.

The latter, 'replacement', means that a replacement is available in case you wish to stop using the deprecated method, but nobody forces you to do so.

'Deprecated' and 'replaced' has always been the terminology used by the Revit API team to mean, 'We have deprecated some functions. Here are the new ones we would like you to use as replacements. The deprecated functions will be removed in the next release.'

With that potential misunderstanding out of the way, here is an overview of the major additions to the Revit 2021.1 API, split into separate sections on API changes and API additions:

The following function has been deprecated and replaced:

The following property has been deprecated and replaced:

Save As API change

The following properties have been deprecated and replaced:

Revit now provides support for Civil Alignments and their associated annotations. Alignments are imported from InfraWorks as a part of the workflow to transfer Civil Structures. The API supports read of alignment properties and geometric information, along with read/write and create of associated annotations. All new classes for the Alignments API are exposed through a different assembly in the Revit installation, located at:

represents an alignment and can be used to find alignments in a document, and to query a particular alignment's properties and to analyse alignment geometry. This object is not an Element, but the underlying Element can be obtained from this object if needed.

represents an alignment station label annotation and can be used to find such labels in a document as well as to create and modify such labels. This object is not an Element, but the underlying Element (which is a SpotDimension instance) can be obtained from this object if needed.

Several new properties allow access to positioning for various parts of a dimension:

resets the shared coordinates for the host model. It provides the same functionality as the UI Command "Reset Shared Coordinates".

After resetting coordinates, the following changes will take place:

Note: There will be no changes to linked models.

will get or set the clipped state of the survey point BasePoint based on the active ProjectLocation of its Document. For the project base point, the get method will always return false, and the set method will throw an exception.

Several new properties have been added for Building and Space Types:

gets or sets the offset distance from this zone to the associated level.

The Revit 2021.1 update release resolves a number of reported issues.

This is mainly a note to self on the following microscopic and totally random selection of a handful of development tickets that I encountered myself: