I just helped address a wish in the Revit Idea Station. Very satisfying. I also started taking a course on AI, designed for absolutely everybody:

The new UnitMigration add-in migrates all unit settings from a source RVT to a folder full of target RVT models.

This add-in has been created and published in response to the Revit Idea Station request by Kasper Miller to change project units between imperial and metric with one button.

This should be easy implement and will save a lot of time.

Currently, the process of converting an Imperial Revit family, project or template to metric or vice versa is very cumbersome.

Particularly if you have do so with several items, which is a task all of us are confronted with very frequently.

One has to toggle through all the unit options, which might consist of 7 categories. Within each of these, we usually have to change at least two options.

That makes 14 clicks and changes for each instance.

What often happens then, is that users just change the Length category, leaving the family mixed, part imperial, part metric, for instance like this: 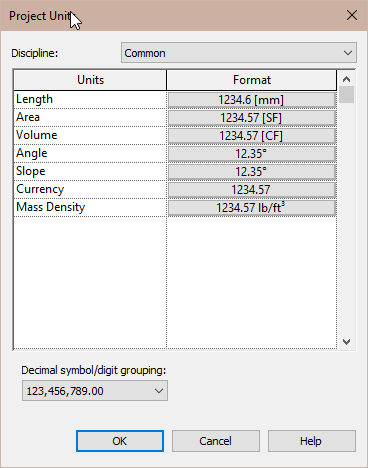 The solution is straight-forward: all unit settings seen by a user in a document in ProjectUnits are stored in a container class DisplayUnit.

These settings can be read from one document through its DisplayUnitSystem and set to another with the SetUnits method.

The add-in take the source data from a source document, stores it, and sets it to all target documents.

One could obviously alter this to read data from a text file or something more fancy – but why bother when you can use a Revit template?

Want to convert to metric? Select the metric template of your choice and paste it where you want.

The add-in requires a source file (like a template) from which to read the units; then, it will write those units to all Revit files inside a selected folder.

Grab the add-in source code from the UnitMigration GitHub repository.

Many thanks to Dragos Turmac, Principal Engineer, Autodesk and Bogdan Teodorescu, Team Manager, Autodesk for implementing and sharing this!

Elements of AI – Crash Course for Everyone

Finland created an official artificial intelligence crash course, the Elements of AI, to educate its citizens on the basics of this new technology.

More than 1 percent of the entire Finnish 5.5 million population already signed up.

Our goal is to demystify AI.

The Elements of AI is a series of free online courses created by Reaktor and the University of Helsinki. We want to encourage as broad a group of people as possible to learn what AI is, what can (and can’t) be done with AI, and how to start creating AI methods. The courses combine theory with practical exercises and can be completed at your own pace.

Here is a table of contents:

I already signed up, myself, and completed Chapter 1 in a bit over an hour.

To round this off, some beautiful relaxing music, a Zhonghu solo titled 草原上, 田再励中胡独奏, On the Grassland:

The mellow and thick sound of the zhonghu sings a melody of the Inner Mongolian style. The listener is brought to the vast Mongolian prairie where the white clouds float in the blue sky and cattle are grazing on the green grasslands.

Wikipedia teaches me that zhonghu and gaohu are modern instrumens, developed in the last century, based on the original Mongolian instrument called erhu.