We mentioned several different Revit add-in unit testing frameworks in the past.

In 2018, I started to program in the Revit API environment. It was completely new to me, so I had to get familiar with the API and its peculiarities. I found The Building Coder blog, which helped me a lot.

We insourced an add-in that was originally developed by an external company. The whole code lives in an assembly which references the Revit API. Then I realized, testing is hard. I refactored the code so that it was as much as possible independent from the Revit API. This code was testable as I knew it, using tests run on continuous integration. But a lot of code remained in the project referencing the Revit API.

I asked Google what to do, but apparently there is not THE way to solve this problem.

There is some stuff around that seems cool, e.g., RevitTestFramework, but I was not happy with that. Furthermore, all I found uses NUnit 2.6, whereas all my Revit independent code is tested by the NUnit 3.x. The build server doesn't like the mix.

As a result, I started to write my own TestRunner using NUnit 3. It is far from perfect; nevertheless, I would like to share it with the community.

Please have a look at it in the Revit.TestRunner GitHub repository.

Get the code from GitHub and compile it. The Revit.TestRunner.addin file will be automatically placed in the ProgramData add-in folder of the selected Revit version,

It is also possible to download the precompiled binaries. Start the InstallAddin v20xx.cmd of your favourite Revit version and run Revit.

The add-in hooks into the Revit 'Add-Ins' ribbon.

By pressing the button, a dialogue will appear. By choosing your testing assembly, the view will show all your tests: 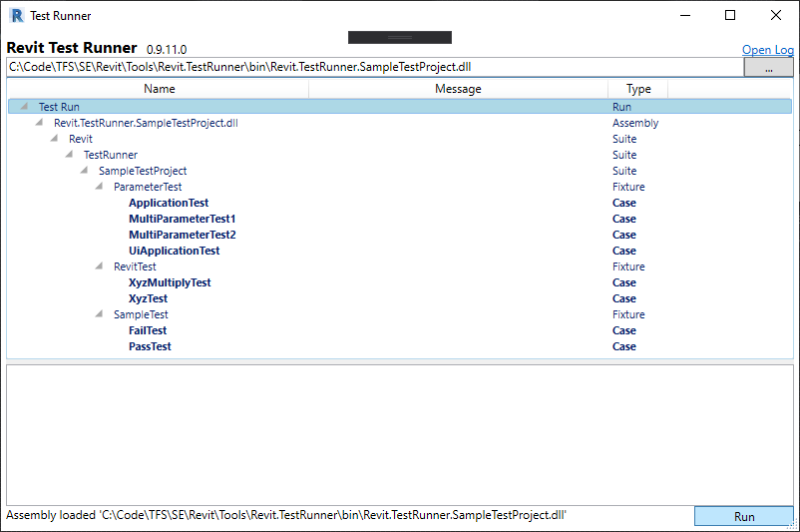 Select the node you want to test and press the 'Run'. All tests below the selected node will be executed. 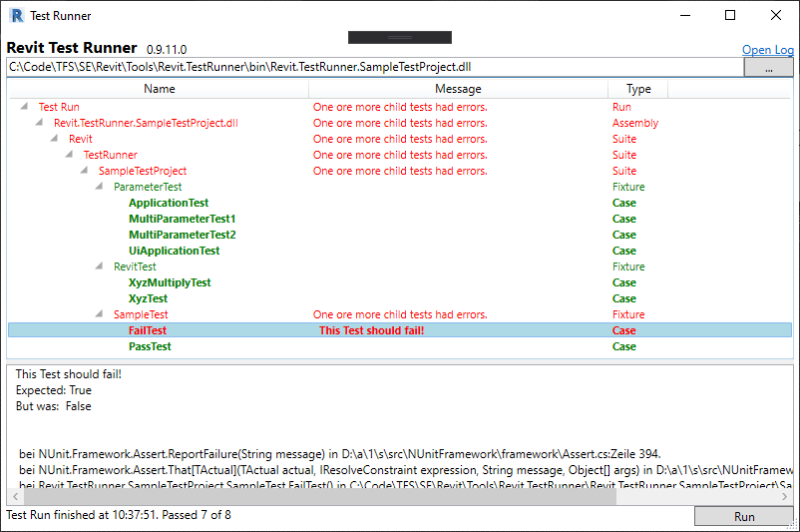 Very many thanks to Tobias for implementing, documenting and sharing this very important new tool!

A quick note on a confusing assembly location when using one assembly for two Revit add-in projects:

Question: I created a support library project implement custom classes and functions and then used this library reference in two Revit add-in projects.

I want to install each project separately, so each project should contain their own library assembly in their setup folder. In this way, I can easily manage every single project without caring about others.

Answer: If you load an assembly A into the .NET framework from directory Da and then load another version of assembly A from a different location Db, the .NET framework will determine that A has already been loaded and reuse the existing instance from Da, ignoring your request to load a second instance from Db. There are ways to work around this, presumably, but I will not even try to dive into that. I suggest that you design your two add-ins so that they do not rely on the location of the assembly A that you load in any way. You can easily move your assembly location determination code out of A into the main two add-ins instead.

Konrad Sobon of @arch_laboratory shared a new Dynamo solution on archi+lab for importing PDFs made easy, using and expanding on the Revit 2020 ability to import PDF files and making it a little bit easier to place multi-page documents.