Let's start this week with these topics that came up in the last one:

Talking about memory streams, I hiked up Rio Chillar in Nerja, Andalusia: 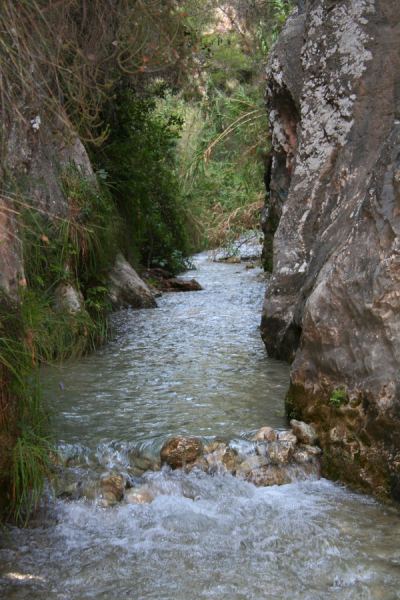 Yet another solution suggested by Frank @Fair59 Aarssen helped Alexandra Nelson share the solution to implement a wrapper for passing back a Revit element to Dynamo from a C# Zero-Touch node, in the thread on retrieving the DimensionType of a Dimension:

Question: I'm trying to build a ZeroTouchNode with C# in Visual Studio whose input is a Dimension element and outputs its DimensionType. It seemed simple, but I'm having trouble returning the DimensionType element. Instead, the node is returning "Autodesk.Revit.DB.DimensionType". How do I retrieve the actual element?

When I tried to return the Revit element itself using the GetElement method and changed the return type to Element rather than ElementType, it still gives me the same output.

Answer: You cannot directly return a Revit class. You need to wrap it in a Dynamo wrapper class.

Please see how to become a Dynamo Zero Touch C# Node developer in 75 minutes and download the handout.

Answer: Thank you for your help and for sharing the link with me. I worked through the concepts in that handout and got it working.

Many thanks for Alexandra and Frank for clarifying this!

A little note on how the add-in manager avoids locking the DLLs it loads:

Question: I am interested in how the Revit add-in manager manages (:wink:) to reload addins on the fly – in Dynamo, we have the notion of packages, which are similar to add-ins (a set of DLLs or Dynamo code we might need to load) – reloading or unloading can be done for Dynamo code, but for .NET DLLs – my understanding is that in the NET framework (prior to the release of .NET core 3) you cannot unload an assembly once loaded – how does the addin manager do this?

Answer: You can load .NET code either from a DLL file on disk or from a stream in memory.

The Assembly.Load method Loads an assembly.

It also provides an overload taking a Byte array argument. That loads the assembly from a memory stream instead. Cf. also how to load assembly from stream.

The add-in manager reads the DLL file from disk, converts it to a memory stream, and uses that to load the .NET code into the .NET environment. Therefore, .NET never gets to see or touch (or lock) the DLL file.

This approach has also been used to implement frameworks enabling debug and continue functionality for Revit add-ins.

How to Become a Successful Freelancer

Let\s close with this 90-minute freeCodeCamp interview on how to become a successful freelancer:

Kyle dropped out of school and worked as a jewellery salesman before teaching himself to code.

His freelance business grew, and he now runs a profitable software development consultancy...