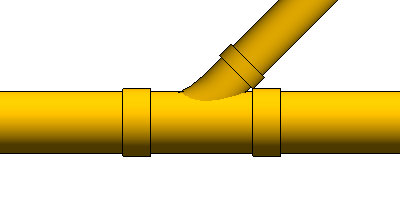 With the above placement, I would expect the pipe's curve's direction to be exactly equal to perpendicularDirection, but that's not the case.

Note that there is a slight difference in the direction and, as a result, I am not able to connect this pipe to a Tee fitting, as described in the thread on how to create a tee fitting with a non-90 degree branch angle for pipe.

BTW, the same issue happens even if I create a new pipe between two points.

Any idea how to fix this?

Suggestion: In some cases, you do not need to specify an exact pipe direction to create a pipe between fittings, nor an exact fitting location to insert a fitting between existing pipes.

Revit will automatically adjust the newly created element appropriately to connect with the existing elements.

Different variations of this approach are explored and discussed in the research series on creating a rolling offset.

Here are some previous articles on the NewTakeoffFitting method and taps:

Solution: I looked at the rolling offset, but it deals only with elbows, not tee fittings.

The problem in this case, however, was due to inaccuracy in the cross product.

I was deriving the pipe direction by doing two cross-products of unit-norm vectors. In other words:

Since X and Y are of unit-norm, I was expecting pipeDirection to be unit-norm as well.

Therefore, the length of pipeDirection was about 0.971 instead of 1.0.

Once I normalise pipeDirection, it works fine.

In my case, I am inserting a T connection, and that API is a horrible mess. Here are the issues:

This issue along with line based family location don't update origin after change has taken me about a week to create a T connection at the right place and orientation instead of probably an hour if the API had worked more intuitively in the first place.

Congratulations and many thanks to Neerav Mehta for this research and solution.

Sorry to hear that the API is so hard to use in this situation.

A while ago, Ollikat shared a general MEP ductwork creation tip in the Revit API discussion forum thread on automatic duct between fittings, summarising his extensive experience in this area:

In summary, I have been co-working several years with my colleague in a feature where different parts of network (duct, pipes, etc.) are being created and connected via API. If we would need to redo everything from scratch today, we definitely would use only low-level methods, like CreateFamilyInstance etc., and then explicitly move, rotate and connect each part of the network separately (also meaning that if there's a need for reducer, create it manually). This is the best approach, because using higher level methods like NewElbowFitting etc. causes all sort of problems, and it is a very tedious job to implement a reliable solution for every possible scenario. Using low level methods gives you total control over what's happening. It's not convenient, but, in the long run, will save your time. This, of course, depends what kind of add-in you are developing.

Unfortunately, the main point is that there's no easy way of generating networks in the Revit API.