Let's close this eventful week with two important enhancements added to the Forge Design Automation API for Revit and our beloved RevitLookup tool:

IFC Support in the Design Automation for Revit API

We recently added IFC support to Design Automation for Revit. The supported functionality for each Revit version is as follows:

Additional documentation will be added asap.

Revit 2018 does not support link IFC functionality at this time.

This support will come in handy for my IfcSpaceZoneBoundaries project.

It needs to link in an IFC file into a Revit project to generate certain room and space information.

That was previously not possible in the Forge DA4R environment, and now it is.

Many thanks to Ryan and The Factory for this important step forward!

Please refer to The Building Coder topic group for more information on DA4R.

I added some improvements that I require in the RevitLookup tool during my development process. So here they are :-)

Further, I worked a lot with view filter overrides and visibility. I wanted to see these in the lookup tool. So, I added the View.GetFilterOverrides and View.GetFilterVisibility method results to the objects window.

For the last improvement, I explored the element statuses in different phases, so I also added this functionality as well.

Some of these enhancement are hosted in new C# snooping modules:

Here is a sample model containing a wall with two dependent elements, a door and a window: 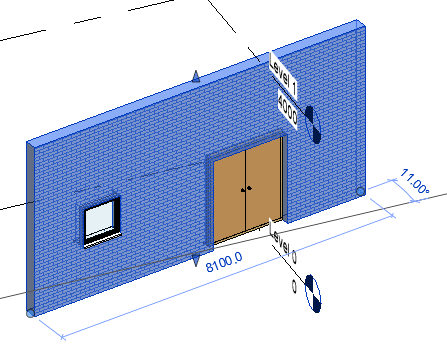 Clicking on the list enables us to jump straight into the dependent element data:

Many thanks to Alex for his clean implementation and kind sharing of these powerful enhancements!

The new enhancements are integrated in RevitLookup release 2020.0.0.1.