I spent a lot of time last week and during the weekend playing around with the Revit API discussion forum topic of finding all ducts that have been tapped into.

It led to several new releases of The Building Coder samples.

Since we have not reached a final conclusion yet, however, I'll postpone the discussion of that.

Instead, I present a little exploration of how to access zones defined in an IFC file in Revit.

If you are following this blog closely, you might guess that this is related to the room boundary CSV exporter project that I recently discussed.

For this exploration, I installed and used RevitPythonShell.

Here are the detailed steps:

I started out my explorations by chatting with our IFC expert Angel Velez:

[A] Exporting zones from Revit to IFC is supported, and you have to set up the project properly for that.

BTW, happy to say that Googling for 'Revit IfcZone' got me to that link!

Link creates them, as a subset of generic models.

[Q] When you say, 'link creates them', does it mean: in a Revit project, link in an IFC file.

IFCZONE elements are now accessible and visible in Revit and we can query their properties and boundaries?

[A] Correct – for link at least. Import does nothing with them.

[Q] OK... I have now linked an IFC file into a blank Revit document.

How can I access the zone information from here?

Is there any way in the UI?

[A] You have to tab into the document until you choose the zone. It will overlap the rooms it contains.

What would be the workflow to generate a mapping from room elements to IFCZONE elements using the Revit API?

[A] I believe the rooms have a property that has the name of the zone(s) they belong to.

Although the 'rooms' are also generic elements. The Revit IFC import does not create real rooms, just space volumes. Converting to rooms is a request.

Thank you very much, Angel, for all the help!

The IFC zones are imported as DirectShape elements and assigned to the Generic Model category.

Their IFC properties are stored in shared parameters, like this: 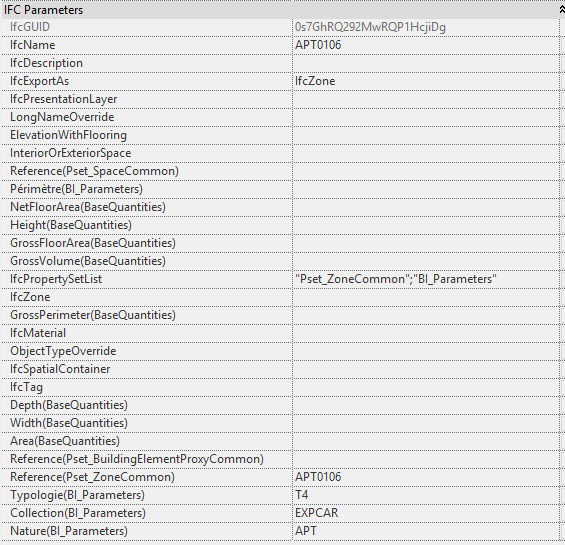 As far as I can tell, I just need to look at the IfcName and IfcExportAs properties.

Based on that discussion, I linked in an IFC file containing zones representing apartments into a blank Revit project document.

I started out exploring the model using RevitLookup.

Since the objects of interest resided in the linked IFC file, however, I soon had to take recourse to another, more flexible, advanced and intimate database exploration tool.

I visited the RevitPythonShell home page and downloaded the installer for Revit 2019.

It is a one-click install.

You can even do it while Revit is up and running – it will be auto-loaded into the running session.

Then, go to the Add-In tab and click the icon. That displays the console. Then copy-paste the code into that.

You can also load and run scripts in other ways – I've never tried that, though.

The RevitPythonShell enabled me to interact with the linked database, explore its elements and develop the following script step by step:

I am also linking in this script source here as a separate text file get_ifc_zone_properties.py.

It lists all the open documents, namely two, the blank hosting project and the imported IFC file.

The imported IFC file has generated a placeholder RVT.

That is the document that I need to dig deeper into.

Using a filtered element collector, I retrieve all DirectShape elements belonging to the Generic Model category.

A couple of helper functions extract a named parameter from an element and implement a Boolean predicate to determine whether an element represents an IFC zone.

With those in hand, I can iterate over all the 1012 direct shapes, access the 25 zones, and save their IfcName properties to a list.

Here is the result of running the script:

I very much enjoyed this little excursion into IFC matters and playing around interactively with the Revit API and Python.

I hope you enjoyed this short summary of my experiences.