Last week, we looked at some 3D intersection and filtering tasks.

Now, let's tackle a 2D intersection one, brought up and solved by Jack Bird in the Revit API discussion forum thread on automatic creation of void extrusion and retrieval of cut area from element:

Actually, it was originally raised a 3D intersection task.

Reducing it to 2D makes it much more tractable:

Question: I’m finding it difficult to find any informative material on a subject in the API that I was hoping might have already been explored.

Specifically, I was hoping there would be an instance where a “model in place” void element is programmatically created in the model using given parameters for shape and dimensions.

For my purposes I was hoping to find a way to use an existing Solid Extrusion Element’s Geometry to define the geometry of this void as I create it.

The overall point would be to:

Then in the same transaction:

I don’t know if that is even possible, but I thought it might allow me to automatically store the required fire rated area for each element. All the drafts person has to do is draw in a Solid extrusion 900 mm wide and as tall as the building based on the plan of subdivision and hide it in the model.

I would be really stoked for any advice, references or links that seem relevant to the task. it would be much appreciated.

Here is an image that may help with visualizing the problem: 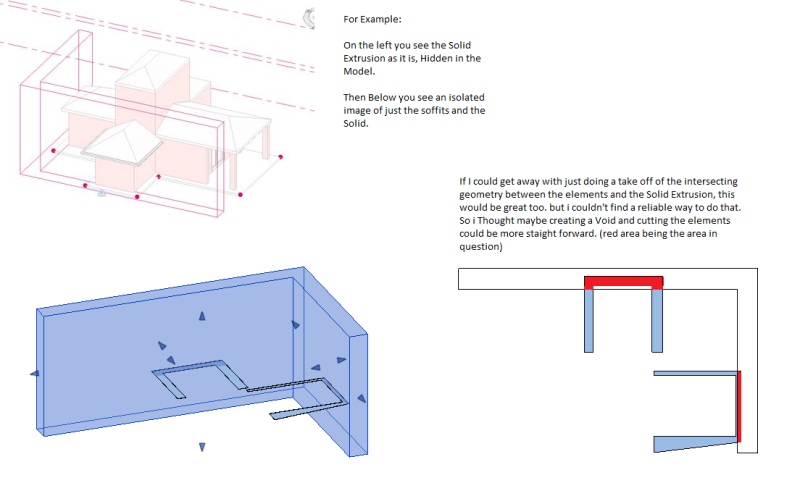 Answer: Here are some discussions dealing with various aspects of voids:

Looking more closely at your descriptive image, the problem seems quite simple to me.

You have a certain area of interest, and certain elements that partially intersect the volume above it.

Instead of determining the intersecting volume, I would suggest retaining the area of interest in 2D, in the XY plane, and projecting the elements onto the XY plane as well.

Once you have everything in 2D in the XY plane, you have reduced the problem to a simple 2D Boolean intersection task.

That can be perfectly and completely addressed using a library to compute Boolean Operations for 2D Polygons.

Response: That RvtClipper.zip was a very useful resource thank you. I had a play with the clipperlib on a previous task but did not consider putting it to use here.

I am currently working on adapting it to my aim and will update this post as soon as I've figured it out.

Answer: Great! I am very glad it helped. I think this can be used to create a very optimal solution to the ask you describe. I look forward very much to hearing what you come up with.

Response: Thanks again, that worked out really well.

In the end I swapped out the RvtClipper Result Execute method to return a List<CurveArray> and substituted the doc.Selection based component for two element parameters that I pass in when calling it: the boundary element and whichever element I am currently testing for an intersection as I iterate through them.

I then loop through the resulting CurveArray instances that it returns and:

All in all, I'm chuffed with the outcome.

All the best and Thank You.

I would be glad to share the code and sample – I wonder though – as I have utilized this function as a component of a bigger two-part method – and have to some degree intertwined the two functions, would you still like to have it?

Furthermore, I have developed it to be reliant on several other methods, so it may seem somewhat verbose as a sample.

With all this taken into account, I wasn't sure if you would like to retract your offer as the sample will be quite large and not entirely focused on the topics touched on in this conversation.

I will outline the whole thing so you may consider.

The overall method now takes all of the soffits of a specific type (Named "Eave") and:

Step one not being entirely relevant to step two, but contingent none the less.

Having gone back through and doing a bit of housekeeping, it is not as bad as I had apprehended.

Please forgive my habit of notating via regions, I have a bit of a thing for abstraction whilst I work.

It is all attached below.

Based on that discussion, Jack very kindly shared a complete soffit subdivision and fire rating sample including a sample model, the sample C# code below and the following description:

The notation within the sample will hopefully take care of most of the describing,

I would however like to make note of the fact that any time I use the term 'Soffit', it is because that is what the element in question represents as far as function goes. Where in reality the 'Soffits' are all floors.

Other than that, the view in the model called "Isolated" is just the "Soffit" and the boundary by themselves; that is the best view to test in, I find.

Very many thanks to Jack for creating, cleaning up and sharing this.

I set it up and tested it by performing the following steps:

Here is a picture of the model:

The result is a bunch of new floor elements:

I published the cleaned-up sample in its own new FireRatingZoneIntersection GitHub repository.

Some things could be cleaned up further, I believe:

Still, I hope others find it useful as well, and look forward to seeing your pull requests for these and further enhancements.