Here is an explanation of the Revit project location elements and selecting the right one to use.

The active Project Location is 'Internal 21748'. 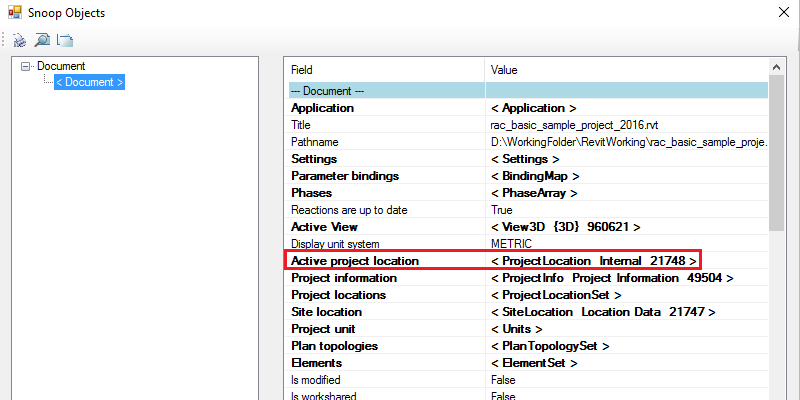 However, the values in 'Project 111428' are correct and can be used to transform the coordinates, whereas the values in 'Internal 21748' are nonsense.

That leads to the following questions:

In the case you describe, the Document.ProjectLocations property will return only one single ProjectLocation element – it will hide the location named "Project'.

The API does not expose the project ones directly, because they are confusing and not particularly helpful for normal use, as you've seen.

If you created more ProjectLocations via the Location/Weather/Site dialog on the Manage tab, they'd share the same SiteLocation as the Internal location.

As far as coordinates are concerned – assuming you have a ProjectLocation projLoc and you execute the following:

This will tell you the relationship between the project coordinates and shared coordinates when that location is active. For example, in the little test I did to check my understanding, it says 18, and my project base point is 18 feet east of my survey point.

I don't know what the 'Project' ProjectLocation's coordinates mean in this circumstance, because it would be comparing to itself. Possibly it's a transform between Revit's internal origin and the project coordinates.

This information is given in terms of the 2018 API. It should mostly apply to Revit 2016 as well. I think the code internals are the same. You might need to make small trivial changes, such as use get_ProjectPosition() instead of GetProjectPosition() or similar.

Many thanks to Diane Christoforo for this illuminating explanation!