Yesterday afternoon, I checked into the Venetian hotel for AU and the preceding DevDay conference:

I am not expecting to emerge again from the hotel and the Sands conference centre into the outside world until the flight taking me back to Europe leaves on Thursday afternoon.

At least I spent some time beforehand acclimatising out in nature enjoying fresh air, peace and quiet, and lots of open space in the Calico Basin right next door to the Red Rock canyon.

Here are some pictures showing basically nothing special: 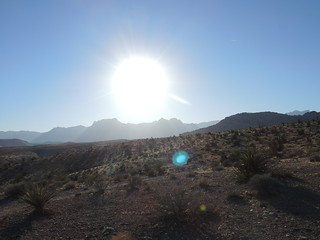 I slept well out in the desert.

Here in the hotel, I woke up at four in the morning. My view looks like this: 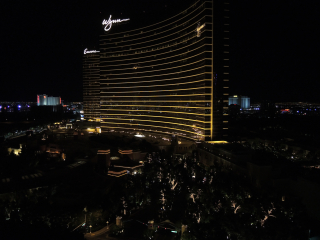 Unfortunately, the visual effect is severely marred by the noise from a bunch of air conditioning units just down below.

DevDays introduction: Jim Quanci explaining what Forge is about and showing an impressive series of demos, both quickly built custom-built code samples and real live customer implementations demonstrating how powerful and useful this is today. 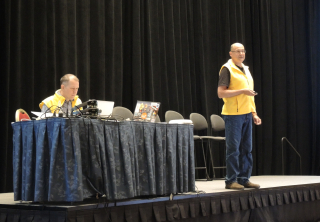 It happens all too easily, convincingly illustrated by Kodak, who patented the first digital camera, worked hard to shift their business from analogue chemical processing to digital technologies, reached the position of number one digital camera manufacturer just before the first iPhone was introduced, missed some important basic understanding of what they were actually doing, and filed for bankruptcy five years later: 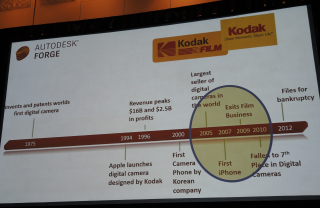 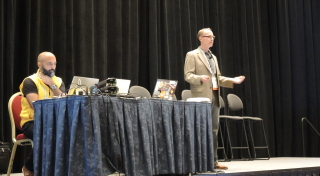 My camera is too weak, the light too low, and the people on the stage wiggle too much. Here are some more pictures anyway. The only nice one I got was of Stephen Preston sitting next to me: 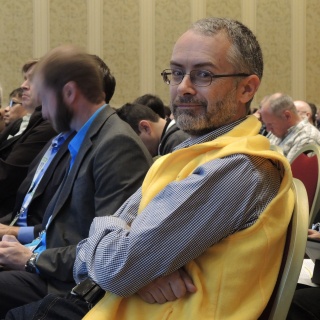 Swagger definition of all Forge RESTful APIs, so you can generate a wrapper for any API you need for any programming language you want, e.g., managed C++, Python, Ruby, iOS, Java, etc.

Kean Walmsley presented an overview of and an experiment using Forge for HoloLens VR and AR.

Cyrille Fauvel demonstrated another strategy and running sample for easily passing in and interacting with Forge model data in HoloLens.

Jim came back and explained the Forge pricing plans, based on cloud credits or 'cc', currently roughly equivalent to a USD:

He illustrated with various examples, e.g.:

These plans were drawn up based on interviews with existing partners.

Whatever use you are currently making of Revit, you can expect your models to end up being combined with other data and viewed through the Forge platform very soon indeed.

Think about what you do!

As a developer, think ahead.

Think of a verb = web service!

I cannot speak openly about everything discussed in the afternoon AEC breakout session, since it deals with unpublished desktop applications.

Sasha Crotty presented news about the Revit API, and also pointed out once again the public Revit roadmap.

We are looking very closely at implementing Forge design automation functionality for Revit.

This is where we are headed when talking about 'headless' Revit.

The answer to a large number of requests: again and again: Revit Idea Station.

Will we move away from Revit towards C4R?

No way, C4R is just a way to store the Revit model in the cloud. Future: more access through Forge to the cloud hosted models.

Mikako Harada discussed BIM 360 with a special focus on docs.

We had an overwhelming number of requests for APIs.

There is no BIM 360 API; rather, we implemented APIs that we use to build BIM 360 Docs.

This is a good example of Forge being used within Autodesk.

The AEC session was rounded off by Augusto Goncalves discussing InfraWorks 360 and Civil 3D news.

Cake and bubbly will be provided!