Here is a Revit API add-in installation issue that came up in various forms in the past and was now raised and resolved once again by Tim Burnham in the special context of .NET Runtime 4.0 configuration:

Question: I have a plugin that has been working fine for all pre-Windows 10 platforms.

Under Win10, the DLL loads into Revit.exe correctly. The .addin add-in manifest contents are displayed correctly in the Revit UI. When I issue the command, however, nothing happens.

I trimmed down all dependencies and code to simply display a message box when the command is launched.

Are there any known Windows 10 issues for Revit plugins, or Security issues that would prevent a command from being executed?

I don’t think Revit 2016 is officially supported on Windows 10, but this is a really important project and Win 10 is the project platform.

Any hints on resolving this?

Answer: I have a solution for my plugin not running.

It was indeed security related, and apparently a common one with regards to Autodesk plugins since .NET 4.0 was released.

After snooping around the journal files I saw this:

Add the following to the revit.exe.config file:

This will apply to all plugins, so beware!

Unblock the DLL individually via its Windows properties. 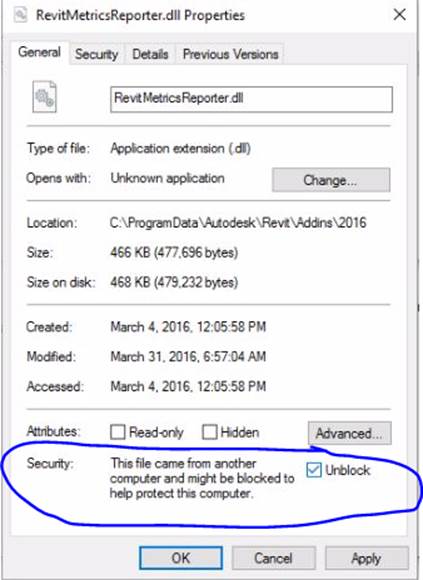 This Block/Unblock property will only show itself if the component was unzipped or downloaded from the web.

Apparently .NET doesn’t distinguish between the two and will provide fewer privileges for the DLL when you attempt to load and run it.

Another option would be to deploy the add-in via a simple MSI installer package.

DLLs deployed via an installer are not automatically blocked by Windows, unlike simple deployment via a zip file.

I am currently developing an MSI package for this to avoid future headache.

Jeremy adds: Closely related issues arose repeatedly in the past.

I first mentioned it in relation to the Revit Add-in file load exception loading the RevitPythonShell on some non-XP machines, and Kean Walmsley provided a comprehensive explanation of it back in 2011 to unblock ZIP files before installing Plugins of the Month from Autodesk Labs.

Addendum: For more background information, please refer to the StackOverflow thread on how to detect if a file has been blocked by the operating system.