I attended the presentation by Richard M. Stallman of the Free Software Foundation FSF for a free digital society in the University of Bern yesterday.

Stallman is controversial and provocative.

I found it very interesting and agree with him on many points, as you probably already noticed from my focus on open source software and avoidance of proprietary solutions – within the limits imposed by my employment by a major commercial software vendor, of course   :-)

All the opinions expressed below are Stallman's and not mine, within the limitations of my abilities to capture and reproduce them accurately.

Oh, and I did indeed meet my colleague Kean Walmsley there, just as I had hoped and expected, and a very pleasant meeting it turned out to be.

Here are a very few pictures from the event, of the beautiful lecture hall, Rms, the adorable GNU, Kean and me: 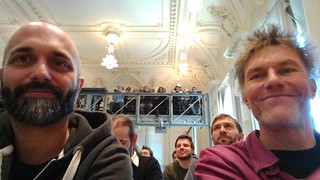 These are the somewhat haphazard notes I took from Richard's talk – I'll call him Rms from now on:

Rms started out by defining some ground rules on representing him and his speech:

Threats to our Freedom in the Digital Society

Participation in a digital society can be good or bad. It depends: is the society just or unjust? If unjust, extract yourself.

Threats arise from software that the user does not control, i.e. is not free.

Free means 'supporting the freedom of the user, not free of cost.

In French, 'libre' versus 'gratuit'.

Payment is a minor detail. Either way is fine. The issue is not how you obtain the software, but what you get.

Does your software preserve and support your freedom, or attack it?

Does the user control the program?

Or does the program control the user?

Our goal is for you to retain control over your life and activities.

Proprietary software is a scheme to enslave people.

Nowadays, the proprietary owners are fully aware of their power and are willing to use this power to hurt their users.

Non-free software is often malware, intentionally designed to hurt the user, e.g., spy on him or her.

Computer systems and most portable phones are equipped with a universal backdoor that enables them to be accessed, manipulated and exploited without the user's consent or knowledge.

The only known defence against proprietary malware is free software.

GNU is a completely free OS.

It was completed in 1992 by adding the Linux kernel.

Initially proprietary software, Linux was implemented, converted to free software, and integrated into the GNU OS by Linus Torvalds in 1992.

Please give GNU equal mention and always show a GNU together with the Linux penguin.

Many GNU distributions nowadays are only partially free.

Ubuntu is a non-free distro.

JavaScript programs can be free or non-free.

Software as a Service

Software as a service gives up control completely.

Never use SaaS instead of a local program on your own system, except for communication activities, e.g., distinguish between your own computing and joint activities.

SaaS obviously enables even easier spying on the user; SaaS makes all user data available to the service provider.

SaaS opens up an even greater universal back door, of course, and new software beyond your control can be installed at any time.

Open source is a different idea.

Open source started in 1998 to disconnect the FSF achievements from the FSF philosophy.

The open source proponents talk about practical aspects only, no philosophy.

Open source is not a movement and not based on principles.

Rsm is often associated with open source; he objects to that, and quips:

If I am the father of open source, it was through artificial insemination with stolen sperm and without my knowledge or consent.

Schools should teach free software only.

Teaching is about sharing knowledge, which is sabotaged by proprietary software.

Anything else attacks the computational sovereignty of the nation.

It is the government's duty to the population.

Here are some measures governments can use to promote free software.

Restricting any one of these rights will undermine all the others as well.

Another threat is surveillance.

We are subject to a lot of surveillance.

Cameras in public locations should not be permitted to be accessible through the Internet. Otherwise, it becomes all too easy to implement automatic continuous global surveillance. Face recognition, even just from a picture of the back of a person's head.

Internet purchasing should be anonymous.

It should be illegal to collect the amounts of data being collected today.

Censorship is another threat to freedom.

The Internet can be censored, and it is.

Icecat is a variant of Firefox protecting user privacy.

Serve the user instead of the web sites.

Avoid all services that offer to hold your data for you, now being incorporated into mobile devices.

You can protect yourself by encrypting all your data with free software on your own machine before placing it on any site that you do not control yourself.

Voting systems are designed to prevent fraud and collect all data required.

If this is managed by a computer, only experts can control it.

In a computer based system, there is no way to audit the results.

It becomes just as easy to commit a big fraud as a small one.

Internet voting is even worse, of course.

Stallman.org includes a page on flaws in Internet voting and computer voting of any kind.

The War on Sharing

The copyright industry is waging war on users to stop this.

First it was just propaganda, e.g. labelling sharing as 'piracy'.

Sharing things with you fellow human beings is good.

The USA adopted the Digital Millennium Copyright Act, selling out to business.

Sharing is a right that we need to have.

Copying is not stealing from the artists... publishing often is.

Compensation to an artist is due when they do something for you, live.

We do not have a debt to anybody for appreciating a copy of something they once did.

The rights holders are often the publishers, not the artists.

Thought on fair ways to distribute income to artists using the cube root of their popularity...

Switzerland is planning to surrender to the aristocrats again and impose an unjust copyright rule.

Mandatory Internet filtering for Switzerland is under discussion, and requiring ISPs to block access to Internet sites.

The DMCA Takedown system, a USA law, a platform has to take down Internet content accused of being copyrighted for ten days, even if the accusation is false.

Google set up a content identification system, checks each posting and tries to match all material against anything that anyone ever complained about copyright infringement.

Switzerland is considering making a content id required for all platforms.

They are even talking to making public libraries pay for people borrowing books.

ISPs may be forced to reveal the identities of their users.

They also plan to violate the human rights by distributing the right to collecting societies to license and charge for everything, including other peoples work, even when published under a creative commons license: Urheberrechtsemission (?)

Regarding censorship, a law is being discussed in parliament next month planning censorship of online gaming.

By the way, 'intellectual property' is a confusing term to use, because it lumps together completely different things, e.g. patents, copyrights, trademarks, etc.

You should never use that term. It spreads confusion. Keep the separate aspects in your mind.

Anyone can paint a sign and walk up and down the streets displaying an opinion to fellow citizens.

This right must be guaranteed in the digital society as well.

However, publishing anything on the Internet requires the cooperation of your ISP, web hosting provider and other companies.

They can and do cut you off arbitrarily at any time.

Wikileaks has not violated any laws and never been prosecuted.

However, Amazon arbitrarily reinterpreted their own terms of service to cut them off.

The Swiss domain wikileaks.ch still exists, even though the USA government tried to block it.

Payments were blocked by credit card companies. In Iceland, this blocking was declared illegal by law and revoked.

We have to make it impossible to cut off controversial services.

Auction of an Adorable GNU

The presentation was closed with the public auction of an adorable GNU for the benefit of the FSF, opening at chf 25 and closing at chf 250. 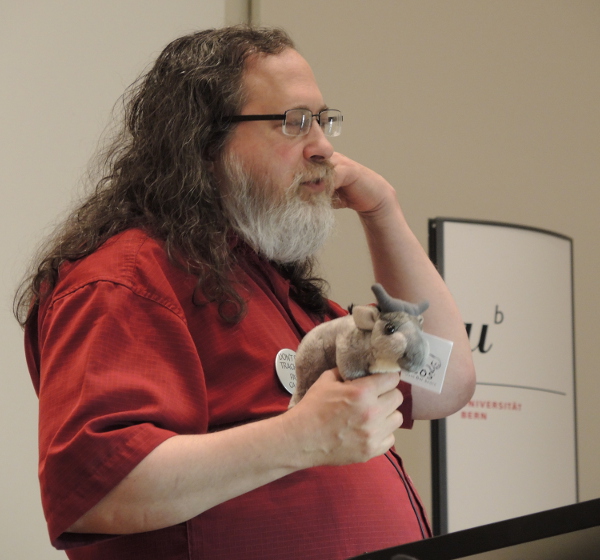 Addendum – Recording of the Entire Presentation