Several people asked me recently about how to determine and track element modification, and I have heard this same question dozens of times in the more distant past as well.

Now it was brought up again here at the Munich Cloud Accelerator by John Allan-Jones of Atkins, and I was motivated to implement a solution:

For a quick first impression, you can jump to the two-and-a-half minute video recording showing it in action and read an initial comment or two.

Most ideas for approaches to this I heard so far were pretty fixed on tracking individual events in the Revit database, e.g. using the DocumentChanged event or a DMU framework dynamic model updater and keeping track of every modification.

In both cases, the add-in will be receiving and processing huge amounts of useless data and struggling to filter out what is really needed.

I suggest a radically different approach that is completely independent of events, Revit internals, real-time analysis and continuous tracking.

I suggest simply creating a snapshot that captures all the properties of interest and reporting the differences between two such snapshots.

Let's take a step back and think about what we really are after.

To track changes, you need to consider what kind of changes you are interested in.

These changes have to do with two things:

The former issue is a simple and pretty obvious matter of defining the correct filtered element collector filters to apply.

The second aspect is one that I'll address in more depth.

It is hopefully possible to capture the BIM element state that is of interest by querying its properties, e.g.:

If somebody makes a change to the BIM model that you wish to track, how and where will that change affect the model?

Certainly there must be a property somewhere in the database that you can use to determine the state before and after and identify that the modification happened.

So let's use these thoughts to define a super simple and efficient modification tracker.

I suggest the following approach to implement a simple and efficient modification tracker:

No need for events!

No need for cumbersome instrumentation!

My sample implements one single command, which alternates between two actions:

You obviously might, if you wish, automatically execute the first action on document load and the second on document save.

If you create an external application to host a button triggering these two action, you would obviously make use of the possibility to roll your own toggle button.

Retrieve all the element data that you need to capture the state of the element of interest to you, e.g., its location, geometry, parameter data or any other characteristics that you would like to track.

Encode that information into a string.

Compute a hash code for that string.

We use the hash code to determine whether the state has been modified compared to a new element state snapshot made at a later time.

We could obviously also store the entire original string representation instead of using a hash code. The hash code is small and handy, whereas the entire string contains all the original data. It is up to you to choose which you would like to use.

You need to ensure that every relevant change made to the tracked element really does make a difference to the string representation that you generate, and that the hash code you compute really is affected by every modification made.

This concept is similar to my appeal to create your own key, and touches on some aspects of my more recent Revit project identification.

One interesting sub-topic here is also how to create a sensible and useful canonical snapshot of the element geometry.

I had a stab back in 2009 analysing nested instance geometry and implementing the GetVertices method that simply returns a sorted list of all unique vertices of a given solid in lexicographical order.

Since the element geometry can contain multiple solids, and they can be nested in a whole hierarchy of transformed instances, I need to traverse the element geometry, retrieve the solids from each level and apply the appropriate transformations to them, similarly to the approach used to retrieve real-world concrete corner coordinates.

For a family instance, the snapshot just stores the family name, type and category instead of the geometry vertices.

The current initial implementation grabs the following element properties to create a snapshot of its state:

The parameter retrieval and storage is based on similar code that I implemented and used in the RoomEditorApp and the CompHound uploader add-in.

Note that a parameter set is unordered. We need to sort the parameters by name to ensure a canonical reproducible representation, just like we need to sort the geometry vertices lexicographically for the same purpose. If we do not, they might be retrieved in an arbitrary different order later on and our string comparison would fail, even though the element data has not really changed.

As an example, here is the first element state string representation we generated:

Determining Which Elements to Track

Element retrieval from the database is always achieved using a filtered element collector.

Determining which elements to track is just a matter of defining the appropriate filters to apply to the collector.

We already looked at numerous different filtering examples in the past.

In this case, we may be interested in all or just certain sets of elements.

You will need to define that in detail for yourself depending on your exact needs.

Here are some of the existing examples and discussions on this topic:

The current implementation selects all elements that:

I created the TrackChanges GitHub repository to host this project, including the entire source code, Visual Studio project and add-in manifest.

If you are seriously interested in taking a deeper look, you will obviously fork and clone that repository for yourself and explore the code directly in the Visual Studio IDE.

Otherwise, for the sake of completeness and to help the Internet search engines find this discussion, let's present and discuss the complete source code for the external command and its various helper methods right here, divided into the following code regions:

Define helper functions and other support for geometrical comparisons:

Define a bunch of helper functions to generate string representations of various objects:

Retrieve solid vertices and sort them lexicographically to define an extremely simplified form of a partial canonical element geometry representation.

Retrieve all the elements of interest:

Determine the state of an element and encode it as a string:

Retrieve each element's state, encode it as a string and store their resulting hash codes in a dictionary mapping element id to hash code:

Determine and report the differences between the two states at the start and end of the tracking period:

Note that this command makes no modifications to the Revit database, so it uses the ReadOnly transaction mode.

The static variable _start_state stores the initial snapshot when we start tracking changes:

The mainline checks whether _start_state has been initialised.

If not, we create a snapshot to start tracking changes and report so to the user.

Otherwise, a new snapshot of the end state is created and the differences are reported: 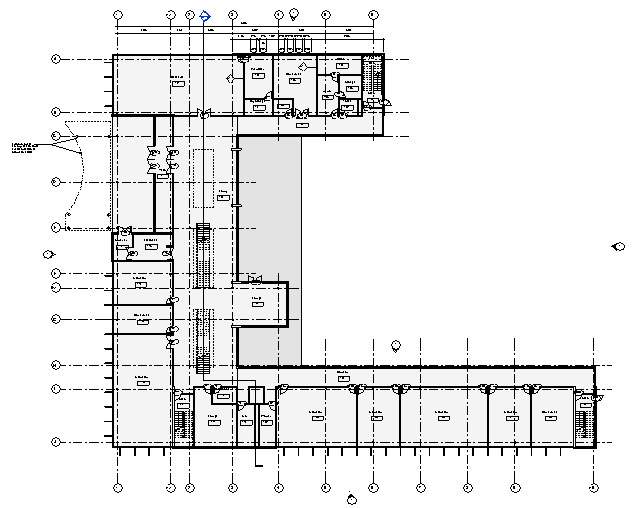 Zoom in to some simple wall that we can modify: 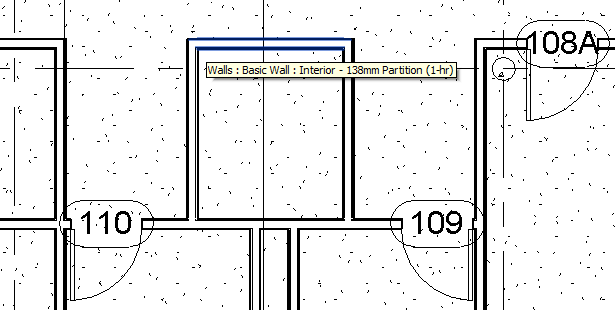 Move it a little bit: 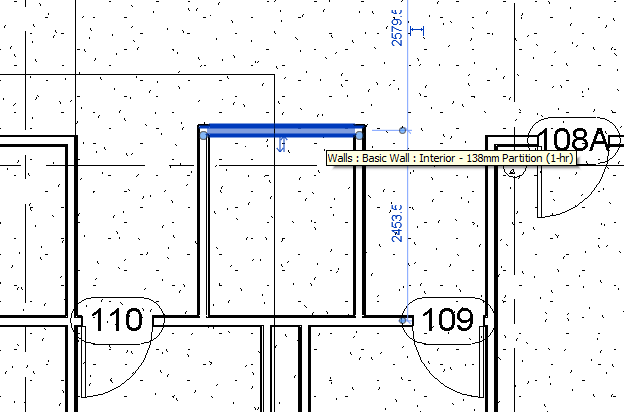 That generates the following report:

Slightly more interesting test after adding a dialogue box to display the report:

Again, we'll just move one single wall; this one will affect more elements:

Move this one down a bit:

That generates the following report:

It is displayed in a task dialogue like this: 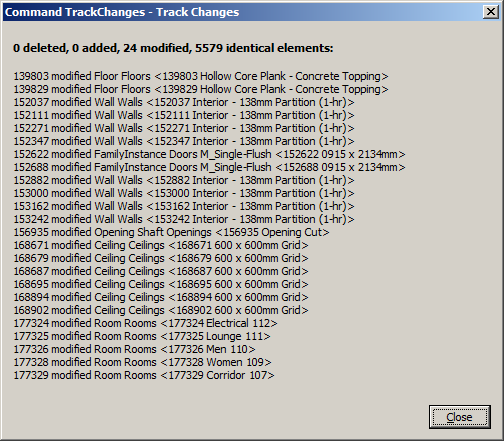 For real-world usage, you would obviously implement a more intelligent reporting system, for example a two-tiered one with a top-level summary displayed to the user and a detailed report stored in a log file or somewhere.

Once again: do not forget that the external command TrackChanges acts as a toggle: every second call creates and stores a snapshot, every second one creates a new snapshot, compares it with the stored one and reports the differences.

Here is a two-and-a-half minute video recording showing it in action:

This project lives in the TrackChanges GitHub repository and the version discussed above is release 2016.0.0.1.