Today, I discuss my new Markdown blog post format, Fusion 360, the Fusion accelerator and a couple of Revit issues:

This is my first post on The Building Coder using Markdown instead of handcrafted HTML.

I tested it yesterday on The 3D Web Coder, where I also explain some of the motivation behind this change.

Suffice to say, it is saving me some time today.

For instance, here is the markdown source code of this section you are reading:

Typepad supports markdown right out of the box:

Unfortunately, I discovered yesterday that its excerpt generation machinery does not, so I now have to add that myself by hand.

As an architect, you may not be aware of Fusion 360, a cloud-based design, test, fabrication and collaboration tool targeted primarily at the manufacturing side of CAD.

That is not all, however, as Lester Bank's article on Fusion 360 for Game Artists explains:

The problem with Solid modelling applications is that they are typically CAD/CAM, CAE tools not really meant for artists. One application is kind of changing that, and that is Autodesk’s Fusion 360. The application was built from the ground up to be an easy to use solid modeller for conceptual design, engineering, matching and sharing CAD content... using Autodesk’s Fusion 360 in a game art pipeline... get started with Fusion 360’s interface and tools... put together some game art assets... completely affordable... free for students, enthusiasts, hobbyists, and startups...

Maybe you will discover that it is a powerful and useful tool for architects as well?

If you are interested in taking a closer look at Fusion 360, you might as well hit the ground running and earn some money with it right away, in this once in a decade opportunity:

Build and publish a Fusion 360 app in the Autodesk App Store during the Hackathon, and you earn a $500 reward, too!

For more information, you can also head over to Adam Nagy's take on the Fusion 360 hackathon site and follow the event tweets at #Fusion360Hackathon. 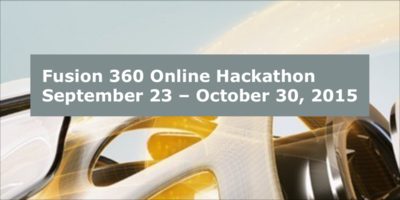 Good luck and have fun!

Answer: Revit 2015 provides programmatic access to this area, so the What's New in the Revit 2015 API documentation for that version covers just about all there is to know about the Revision API.

You may also be interested in the GetRevisionData Revit add-in.

I just upgraded it to Revit 2016 for you; check it out in the GetRevisionData GitHub repository.

Answer: The topic of driving Revit from outside or other background threads has been discussed extensively in the Revit API discussion forum and on The Building Coder blog, so all the information that I am aware of on this topic is already sitting there waiting for your perusal.

Please check out the topic group on driving Revit from outside and explore that material.

I would recommend starting at the end, since the last two entries in that topic list provide a good overview.

Regarding the bulk upgrade, you will probably also be interested in taking a look at Saikat Bhattacharya's File Upgrader add-in.

It was originally written for Revit 2012 and updated several times for later Revit versions.

For a while, it was also available from the Autodesk Exchange AppStore.

I am including the most recent version that I happen to have at hand here, in FileUpgrader_2015-08-27.zip.

Let's finish off with something unrelated to the Revit API.

Somehow, both always seem to include and almost require a certain provocative tinge.

If you are, you are probably aware of the world's most renowned and valued – both artistically and $-wise – graffiti artist, Banksy.

Here is a Channel4 news item and two-minute YouTube video to give you a first impression: