Today we held the DevDay Conference at AU. Exciting stuff.

Before getting to that, let me add one little Revit API exploration that I performed much later in the day, getting closer to midnight, after the ADN party; prompted by my colleague Katsuaki Takamizawa in Japan, I migrated the old Revit 2012 GeometryPartsAnalyzer add-in analysing detailed part layer geometry by splitting selected walls into parts in a temporary transaction using PartUtils.CreateParts to Revit 2015.

That is an interesting tool and demonstrates interesting technology that is still useful and important today, touching on the topics of retrieving detailed wall layer geometry, splitting an element into parts and making use of the temporary transaction trick.

To migrate to the current version and keep clear track of the exact steps taken, I published it in its own new GeometryPartsAnalyzer GitHub repository and created a release before and after each migration step, so you can now easily see the exact differences caused by moving from Revit 2012 to Revit 2014 and from Revit 2014 to Revit 2015.

OK, so much for that. Back to the main event of the day: 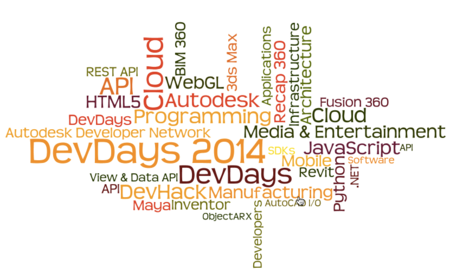 A fundamental disruption of the software industry is happening right now, and there is no way for anyone to avoid it.

Let's examine this opportunity for Autodesk and all partners to take advantage of it to grow our customer base by 10x and revenue by 2x – an opportunity like this only comes by once in twenty years – seize it now or risk becoming irrelevant in the next couple of years.

Our tour of DevDays 2014 developer conferences completed in Asia and Australia in November.

I am attending it here at Autodesk University in Las Vegas today and in the Western European venues in the coming two weeks: Paris, London, Gothenburg, Munich and Milano.

There is still time to apply to join us there (cf. below) – come and learn how you can take advantage of new technologies to grow your business reach by a factor of ten.

The DevDays events have always been the best way for Autodesk Developer Network partners keep up to date with new and upcoming technology and features. Now let's leverage what we are doing to expand with new technology and to new customers.

We cover the Autodesk cloud and mobile APIs and, of course, new features and APIs for the desktop products too.

Jim discussed improvements made to the Autodesk Exchange AppStore, current trends, how to grow towards more sales.

Philippe demonstrated real code showing how to maximise sales by taking advantage of the term based sales and entitlement REST API (2, 3) and how to sell web services on the store.

Jim demonstrated Fusion 360 as an example of powerful 3D design in a browser and as a web platform.

Back to the Autodesk View and Data API, Jim demonstrated live publishing of 3D models in both a blog hosted by Typepad and his personal Facebook page. Less than 60 seconds each.

As Jim keeps saying, "Easy – why would anyone nowadays want to publish any model in anything but 3D?"

The A360 Platform – from Beta to Production

The Identity and View & Data web services are now going into production, so we looked at code samples for that.

Virtual Reality for the Masses – and You Too!

Surprise and impress your friends, colleagues and – above all – customers by delivering your models in stereographic 3D virtual reality with just a few hours or less of work.

In the afternoon, we split into three separate parallel tracks: desktop, cloud and mobile and the 'programmers corner'.

In cloud and mobile, we take an in-depth look at BIM 360, Field, Glue, Fusion 360, and View & Data future directions and yet more code samples.

The programmers corner is for anyone who wants to chat with ADN and other engineers and is momentarily not interested in the other sessions.

I can't say much more about these here and now in public, obviously... if you have not been to DevDays yet and there is still one coming somewhere close to you in the next few weeks, i.e., if you are located in Europe, grab the chance to come and see for yourself – and say hello:

Still a Chance to Join!

Look for more information, locations and schedule at www.autodeskdevdays.com. ADN members, register via that website. Non-ADN members, please contact us at devdaysinfo@autodesk.com. Material demonstrated and discussed at DevDays is confidential and under Non-Disclosure Agreement.