I was prompted by a Revit API forum discussion thread on Jeremy's setoutpoint to take another look at my SetoutPoints structural concrete setout point add-in, publish it on GitHub and migrate it from Revit Structure 2013 to 2015.

SetoutPoints is a Revit add-in for automatic placement and management of structural concrete setout points.

Setout point markers are automatically generated at all vertices of structural members. They can be manually designated as minor or major: 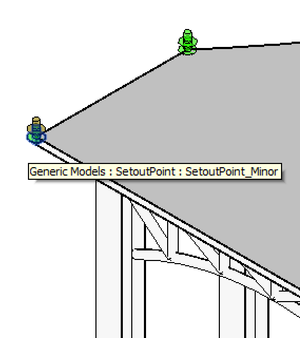 The major points are automatically numbered, scheduled and converted to global northing and easting coordinates.

The numbering can be edited and regenerated to ensure schedule consistency and readability.

Here is a collection on background and further reading on this project:

Sanjaymann took a look at this project, encountering and solving a transformation issue with some structural foundations:

Question: I was working with the setoutpoint example on structural foundations. The code places the points on one foundation but not on the other. Both of them are same family.

As said, both foundations belong to the same family. Why do they behave so differently?

Response: Sometimes the sword fails and the needle does the job.

While looping over the corners:

The point p has to be transformed:

One line did the trick.

Answer: Congratulations on finding the right needle for the job!

Thank you very much for your research!

Motivated by your work, I created a GitHub repository for the SetoutPoints application and migrated it to Revit Structure 2015.

I applied the change that you suggest by adding the transformation as an 'out' parameter to the GetSolid method instead of moving the code out, cf. the GitHub diffs.

Many thanks to Sanjaymann for his interest and research!

I hope this is of interest to others as well.