Here is a list of upcoming events, most of which I will be involved in in one way or another:

Here is the list of cities and dates where our DevDays events 2014 will be held around the world later this year.

These events are accessible to ADN members. If you are not an ADN member and still would be interested in learning more about application development related to Autodesk products and technology, please contact us and let's discuss.

The DevDays conferences are the best way to learn about Autodesk's newest technologies and future products. To get a feel for what goes on at these events, ADN members can check out the presentations from last year on the ADN extranet at Events.

A complete DevDays 2014 agenda will be posted soon, and online registration will go live in late September. Note that the registration for the ADN Conference at AU in Las Vegas will go live on August 27, 2014. See below for more information on that.

New for 2014: We will be hosting Meetup events in most locations. These events are open to everyone, not just ADN partners. So, invite your technology friends along for an evening of learning and sharing in a casual environment.

The ADN Conference at Autodesk University in Las Vegas, Nevada, USA, is taking place on December 1, with two separate DevHack events on December 2, for Design & Engineering and Media & Entertainment, respectively.

Registration will open today, on August 27, 2014. Visit the registration website at http://au.autodesk.com/plan/pre-conference/adn-conference-devdays.

Over the coming months we DevTech engineers and ADN evangelists will be attending a number of different meetup and hackathon events. Here's a list of some of them:

Question: Is it possible to programmatically control the toggle determining whether to 'Show annotation categories in this view' in the Visibility/Graphics Overrides dialogue, marked in red below? 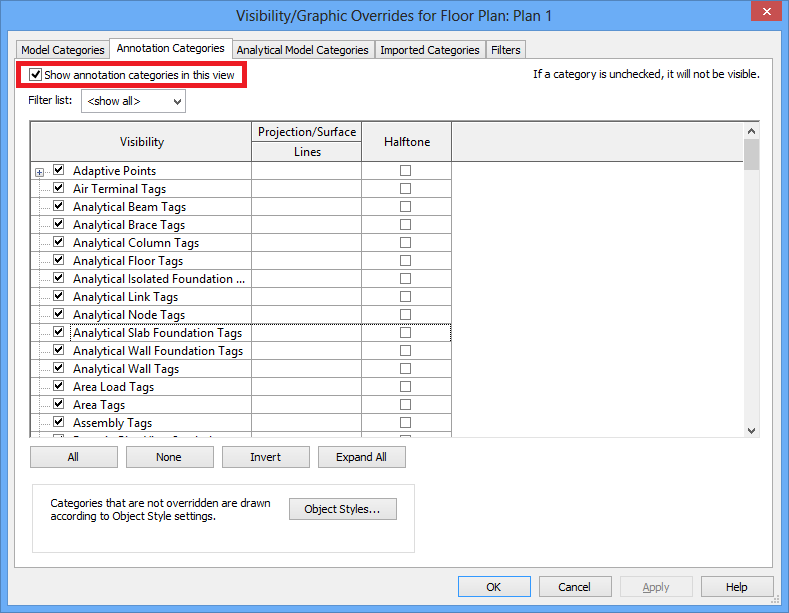