My first post dealing with Revit 2015 is dedicated to RevitLookup, the most important Revit database exploration tool, both for developers and interested non-developers.

This is particularly urgent, since RevitLookup no longer is included in the standard Revit SDK (software development kit).

It is now available from the RevitLookup GitHub repository instead.

I created a preliminary version of RevitLookup for the Revit 2015 Meridian pre-release, just to ensure that everybody who needs access to this tool has it available right away. 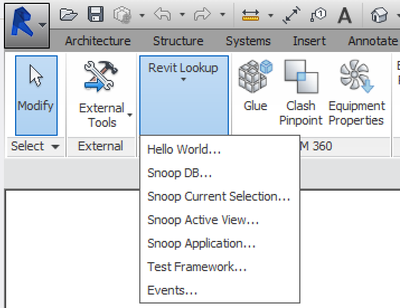 It compiles and runs perfectly fine, although some compilation warnings on use of deprecated API functionality are displayed.

It currently refers to the Revit API assemblies located in the Revit Meridian root installation folder. That path needs to be updated to compile for an official release of Revit 2015.

Here are the steps I performed for the migration, which was extremely straightforward:

That will probably be removed again soon, since the same information can be easily gleaned from the version control system.