RoomEditorApp for Revit 2014 on GitHub

I discussed my Revit add-in for my cloud-based, real-time, round-trip, 2D Revit model editing application on any mobile device in depth last spring, with the last update on its implementation status published back in May.

Even at that time, since I was mainly concentrating on the exciting cloud aspects of the application, I had added quite a bit of functionality to the Revit add-in that I never got around to documenting, such as

The various aspects that I did already discuss are listed in The Building Coder Desktop category.

By popular demand, I also provided an emergency stop-gap update of the source code for the latest Revit 2013 version during the Sydney Revit API training in July.

I now really have to get going with the preparation of my AU presentations, and one of the unavoidable steps is migrating this application to Revit 2014, which is what I discuss here and now.

One of the prerequisites for interacting with the cloud database is obviously uploading and querying of its data.

I use CouchDB as the cloud database and the DreamSeat .NET library to access it from my C# Revit add-in.

To create the library for my add-in to reference, I cloned the DreamSeat GitHub repository to my local system:

Since it was last built using a newer version of Visual Studio, I had to edit the two first lines in the DreamSeat.sln solution file to be able to use Visual Studio 2010 instead. I simply changed them to read:

No other changes required, the library compiled, and I can add a reference to it to my Revit add-in project.

RoomEditorApp Migration from Revit 2013 to Revit 2014

I created a new Visual Studio solution for a new Revit add-in named RoomEditorApp and copied the code from my old Revit 2013 GetLoops add-in into it.

I posted the flat migrated version to the GitHub RoomEditorApp repository and created an initial version 2013.0.0.9 to provide a starting point from which to track my changes.

I easily fixed all the warnings, as described in numerous previous discussions, and published version 2014.0.0.10 compiling with zero errors and warnings.

Oops, I also need to change my namespace from GetLoops to RoomEditorApp. This became obvious as soon as I attempted to load the external application in Revit, since it complained about the missing RoomEditorApp.App specified in the add-in manifest, which was still named GetLoops.App. The namespace is correctly specified in version 2014.0.0.11.

Oops again; it next complained on loading into Revit about lacking the embedded icon resources. Luckily, my external application includes assertions that ensure that the required resources are actually found, so I noticed what the problem was. Here is finally version 2014.0.0.12 with icons added and displaying the user interface successfully in Revit 2014: 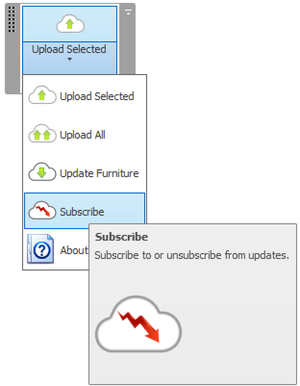 For testing purposes, I prefer a local installation of my database in addition to the cloud-based one.

That obviously also requires a local installation of the CouchDB database system itself as well.

I install it as a service and later go into the computer management and set the service to be started manually instead of automatically, so it is only available when actually needed.

Since I already have my cloud-based application up and running on the Iris Couch cloud CouchDB server from my last experiments, I can simply replicate that.

I can replicate it using the CouchDB Futon interface on my local machine installation, replicating to a new local database named 'roomedit' from the cloud-based database instance:

I am up and running now in Windows 7 and Revit 2014, as opposed to my rather obsolete previous installation based on Windows XP and Revit 2013.

I still have a lot of undocumented features that I would love to discuss here in the Revit side of things.

As said, I need to prepare my AU presentation and handout on this topic.

Whereas the Tech Summit presentation that I worked on in the spring focused heavily on the cloud aspects, the AU presentation will be significantly longer and cover both the cloud database and the Revit add-in features.

Therefore, I can document the missing bits and pieces in the coming weeks as I get my AU material ready, with the deadline for handing in the material on November 15 looming on the horizon.