As you probably noticed by now, Revit 2014 has been announced. Here are the main product features:

Each and every one of these is really exciting in itself, and almost all include or are even based on enhanced API support. Some of the ones that seem most exciting to me are the non-rectangular crop regions, parameter variance for groups, enhanced schedules, displaced views... well, as said, they are really all very exciting.

And this is not even mentioning some of the new API features, such as the possibility to launch a Revit command and control copy and paste operations. I will get to all that real soon now.

Determining the Columns Supporting a Beam

Still, ignoring all that busy-ness for the moment, I chug along and return to a topic similar to my discussion on retrieving all touching beams.

In that post, I showed how to recursively traverse a collection of beams and detect the neighbouring ones at each end using an ElementIntersectsSolidFilter with a sphere.

Here is a view of a simple sample model: The task at hand is to pick the indicated beam and report the columns supporting it:

The sample provided includes code exercising these tests and also the original bounding box implementation. It is enclosed in 'if' statements checking the setting of the following Boolean variables:

That enables them to be switched on and off interactively in the debugger, if the need arises.

Unfortunately, as it turns out, they both do not work.

The beam solid is not quite big enough to intersect the columns, because the beam is cut back so that it does not actually intersect them.

The same problem also prevents use the element intersection filter.

It would be great if there was a possibility to grow the solid just slightly, e.g. offset all its faces outwards by an inch or two or define a tolerance before executing the intersection check, like for the bounding box. Unfortunately, growing or shrinking an arbitrary solid is much harder than a bounding box and therefore not implemented.

The BoundingBoxIsInsideFilter can be instantiated with an optional double tolerance value that allows control over the match criteria by using the given tolerance in the geometry comparison.

Moving the Beam Downwards in a Temporary Transaction

Lacking the tolerance option, I thought that maybe it would help to move the beam down a bit, and that it would intersect the supporting columns then. Unfortunately, that does not help either.

The problem is not only that the bottom face of the beam solid may be located above the end of the supporting columns, but also that the ends of the beam are cut back to avoid intersecting the columns, so their solids do not intersect even when the beam is moved slightly downwards.

This temporary movement forces a switch from read-only to manual transaction mode, of course, even though the model is not actually modify in any way in the end.

By the way, these changes temporarily caused an error saying "Attempted to read or write protected memory. This is often an indication that other memory is corrupt." This was probably due to accessing the list of elements generated within the temporary transaction after the transaction group is rolled back. I handled that problem by storing the element ids instead of the live elements themselves inside the transaction, and then opening the elements via their id after rolling back the changes.

As said, the temporary downward translation still did not produce any intersections.

Time for another idea.

A colleague suggested that if the beam is cut back by the columns, you can iterate over the beam geometry faces and call the Element GetGeneratingElementIds method on each one, which might return the column element ids. In this example, you might also get faces generated by joins with other beams.

I tried this, encapsulating the code in the section if( useGeneratingIds ). Unfortunately, all the generating ids belong to the structural framing or floors categories, so that does not help to determine the columns either. No columns at all are returned by this method.

I then realised that I could create a much simpler independent solid shape to intersect the columns by extruding a cylinder along the beam location line, offset downwards to just below the bottom face of the beam. It might require extending a little at each end. All supporting columns should be intersected by it.

I can use code similar to the sample presented to find 3D elements by intersection.

A similar approach as the solid intersection with an offset cylinder could obviously also be implemented using the ray casting functionality provided by the FindReferencesByDirection and FindReferencesWithContextByDirection methods and the ReferenceIntersector wrapper class.

I did not implement any sample code demonstrating this, because I wanted to generalise the straight beam cylinder solution to a more general arbitrary curve case.

Once I had the working solution using a cylinder defined by the straight beam location line offset downwards, I realised that it might be nice to use more generic sweep along curve functionality instead. After all, the beam location curve might not be straight, and a non-linear location curve can quite simply be used to generate a non-linear solid using the CreateSweptGeometry method instead of CreateExtrusionGeometry.

My first attempt caused the CreateSweptGeometry method to throw an exception saying that "The given attachment point don't lie in the plane of the Curve Loop. Parameter name: pathAttachmentCrvIdx & pathAttachmentParam". That was my fault, though, because I was providing zero for the parameter value, which is probably the normalised curve start point parameter. When providing the raw parameter value returned by curve.get_EndParameter( 0 ) instead, all works fine.

Here is a rather unrealistic sample spline beam that I used for testing: 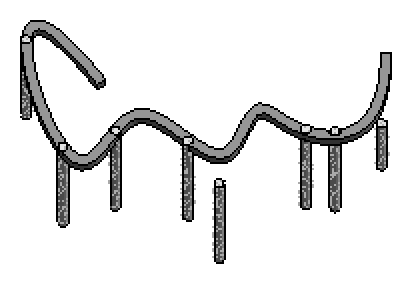 The algorithm reports the following supporting columns for the spline beam:

Here is the complete source code of this command, including the test branches that are disabled by default. As said, they can be enabled and tested by modifying the Boolean switches interactively in the debugger.

For your convenience, here is GetBeamColumns06.zip containing the complete source code, Visual Studio solution and add-in manifest of the GetBeamColumns external command.

I hope you find this both interesting and useful as a basis for your own variants.