The whole EMEA DevTech team is meeting in Neuchâtel prior to the coming weekend's annual Autodesk football tournament taking place here. I won't be able to play myself, unfortunately, for the first time in many years, since I had a prior appointment with friends to go climb the Spitzhorn mountain.

We also held a virtual meeting with Stephen Preston from the US, who is now our world-wide DevTech manager. Here we are in virtual union, from left to right, Gary Wassell, Marat Mirgaleev, Vladimir Ananyev, Stephen (virtually), Jeremy, Adam Nagy and Philippe Leefsma:

Meanwhile, I finally got around to taking a quick look at a completely new exciting topic:

I repeatedly pointed out the power of being able to interact directly with the Revit API using Daren Thomas' Revit Python shell, originally implemented for Revit 2010, then for Vasari, and updated for Revit 2012 and Vasari 2.1 last autumn.

Here is another interactive interactive Revit programming environment by Håkon Clausen of Nosyko AS.

His RevitRubyShell is based on the interpreted language Ruby programming language, which is more modern than Python and inherently object oriented.

According to the introductory blurb on its home page, Ruby is a dynamic, open source programming language with a focus on simplicity and productivity. It has an elegant syntax that is natural to read and easy to write.

Kean Walmsley also had a look at it in its IronRuby incarnation for use in programming AutoCAD. He presents a first overview and introduction to Ruby in his initial post on using IronRuby with AutoCAD.

Håkon says: I hope you will find this useful. I use it a lot for rapid prototyping and testing when programming against the Revit API.

It sports the simplest installation I have ever seen for any Revit add-in whatsoever, the absolutely ultimate one-click RevitRubyShell installer, which should be opened IE and will install the add-in directly, setting up an external application creating its own simple single-button panel:

Clicking the button launches the Revit Ruby shell including a snippet of sample code that can be immediately executed by pressing the blue 'Run' arrow button: 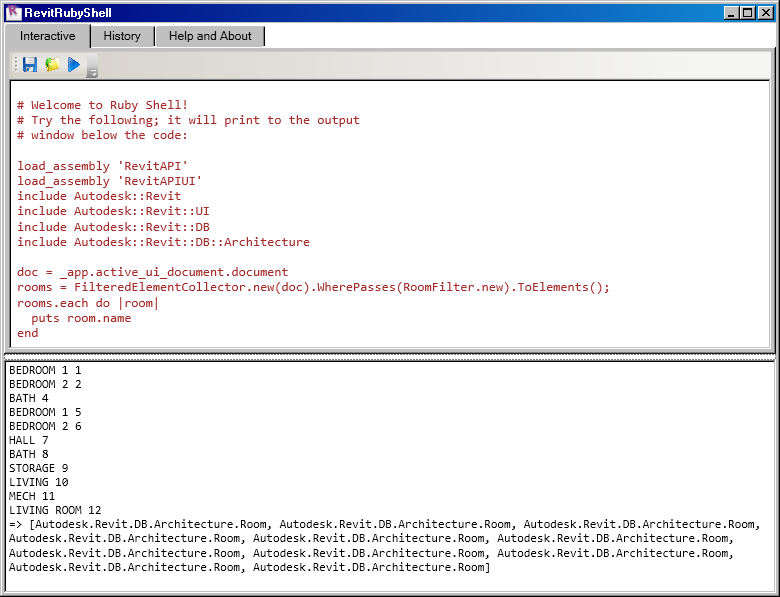 Well worth looking at, and might prove a huge programming productivity booster.

Many thanks to Håkon for developing and sharing this!