File Upgrader Plugin of the Month

The File Upgrader can be used to batch upgrade previous versions of Revit files to the Revit 2012 format. It can upgrade both project files and family content: 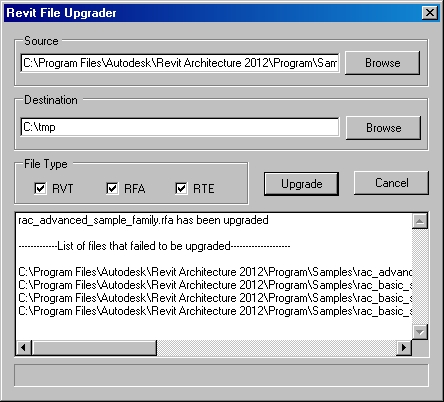 The download includes a compiled and ready-to-install version for 32 and 64 bit Revit 2012, readme file describing its installation and usage, and the full source code. You can therefore use it as is, tweak it for your specific needs, or freely integrate the functionality into your workflow in other ways.

Check it out on the labs!

Here are two other noteworthy releases that I picked up from other posts:

Photofly 2.0 is now available, and Emily Kfouri wrote about both the update as well as a detailed explanation on how to use Photofly to effectively create a 3D model of a building with Revit and Vasari.

Later: Just now, Kean Walmsley published a great little write-up describing the steps involved in using the new version to rapidly defining an impressive mesh with a texture, and highlighting that "this type of functionality is really going to change the way we think about the design process by drastically reducing the cost of 3D model capture".