Debugging an Add-in Without Restarting Revit

Here is a question that has come up again and again in recent years:

Question: How can I avoid re-starting Revit after every change to my add-in code? It is very time consuming.

Answer: Unfortunately, the Visual Studio 'Edit and Continue' feature does not work when developing Revit add-ins.

Personally, I set up the Visual Studio project to start up Revit with a testing project already loaded, by appropriately setting up both the 'Start external program' and 'Command line arguments' in the debug properties. Then I can hit Alt-D-E in Visual Studio to stop debugging, edit, recompile, and hit F5 to start up debugging again, continuing within seconds in the same project exactly where I left off, assuming the sample model is not too large. If it is very large and you find you have to restart Revit often, I would suggest simplifying the model in the initial development phases.

To do so, select Solution Explorer > Properties: 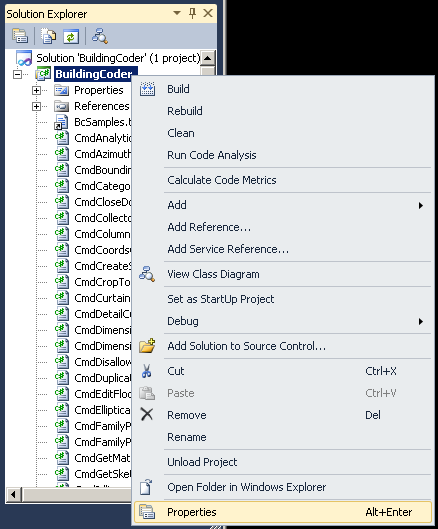 In the project properties, pick the Debug tab, define Revit.exe as the start-up program, and set a Revit project file as the command line argument:

That is efficient enough for me. As said, it is slower if you are forced to perform your debugging in a large Revit model that takes a long time to load, of course.

Another partial work-around that I very seldom use is to run Revit inside of the Visual Studio debugger with my project opened, like normal. If I really want to edit some of the source files and continue debugging at the same time, I open the same project once again in another instance of Visual Studio.

Several workarounds have been proposed for reloading an add-in to debug, dynamically loading a plug-in from a byte array in memory instead of a file on the hard disk, and using the Revit Python shell.

Alternatively, and officially supported, you can make use of VSTA, converting the code you are currently working on, i.e. actively debugging and editing, to a VSTA macro. VSTA will allow you to debug, edit and retest the code without having to restart Revit or reload the model.

The Revit API DevTV Part 2 shows how to use 'Attach to Process' in Visual Studio instead of starting Revit from the Visual Studio debugger to edit your code and continue debugging within the same Revit session. Unfortunately, on the 64 bit OS, there is also a limitation in Visual Studio itself which does not support the Edit and Continue functionality on that platform at all.

I already pointed out repeatedly that the Add-In Manager allows you to unload and reload an add-in without restarting Revit. For more details, please refer to the Add-In Manager help file. In its Revit 2012 incarnation, it is by default installed as

It states the following:

Change the way of developing and debugging add-ins

Usually, when developing and debugging an add-in with the Revit API, user has to close & re-open Revit each time he/she modifies the add-in code and wants to re-compile. But with Add-In Manager 2011, user can modify and run the add-in directly without closing & re-opening Revit again and again (find more details from Develop & Debug add-ins with Add-In Manager).

However, it does not seem possible to edit code while debugging a Revit add-in even if it is loaded using the Add-In Manager:

It can only be modified once the debug process is stopped – however, if Visual Studio is still attached to Revit, then stopping the debugging session also closes Revit.

So it seems you cannot avoid first Detaching from Revit and then stop debugging and recompile, then Attach to Revit again if you want to debug your add-in.

If you just want to be able to run a command from your add-in, then modify the code, then run the updated code WITHOUT debugging, then that's fine.

Also, re-reading the text from the Add-In Manager help file, it seems like by 'debugging' it may simply mean 'testing your add-in', and not the actual debugging process, including hitting breakpoints, stepping through the code, checking variable values, etc.

Here are two suggestions by Adam Nagy on using the Add-In Manager with 'Detach All' and Debugger.Break:

Add-In Manager and Detach All