Iffat Mai of Perkins + Will brought up an issue with the MeasurePanelArea Revit SDK sample, handled by Joe Ye:

Question: As we reviewed the Massing > MeasurePanelArea SDK Sample, the following error message was displayed while trying to run it: 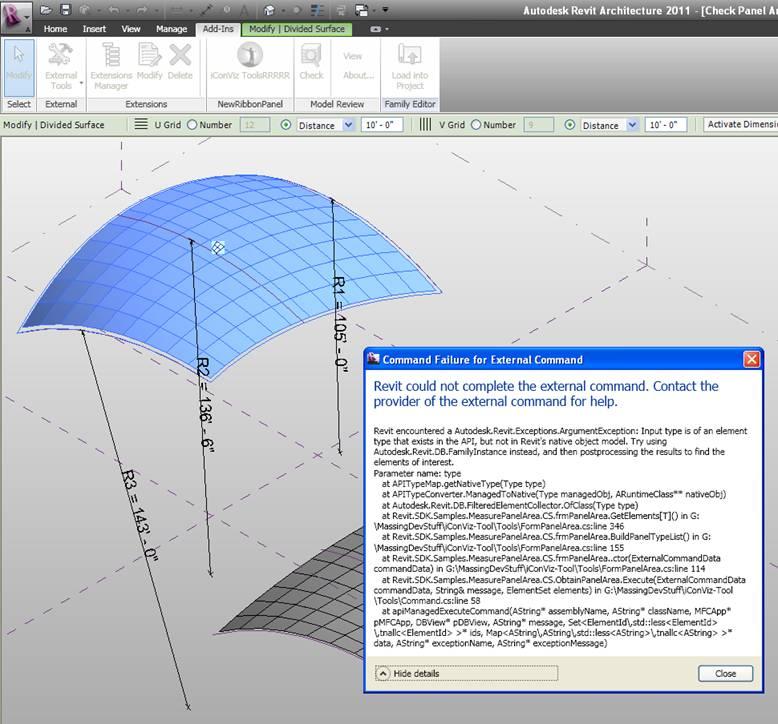 It says: "Input type is of an element type that exists in the API, but not in Revit's native object model. Try using Autodesk.Revit.DB.FamilyInstance instead, and then post-processing the results to find the elements of interest."

Answer: This is due to the fact that the Panel class cannot be accepted by the FilteredElementCollector OfClass method, i.e. when calling

This call is made in the GetElements template method:

We already discussed this issue of filtering for a non-native class in some depth. It applies to AnnotationSymbol, Panel, Room and several other classes.

I changed the sample slightly to add another non-template method to get all panels in current document instead:

Here is my modified version of FormPanelArea.cs with these changes. Please replace the existing version of the file with it.

Many thanks to Joe for this fix!

The newly released updated SDK for the web update 2 and subscription releases includes several other SDK sample updates. Unfortunately the MeasurePanelArea fix was not made in time to be included in the SDK update. We also recently discussed a fix to the DoorSwing SDK sample which does not seem to have been included either.