One of the most enthusiastically received samples I presented at the AEC DevCamp conference has also proved a valuable resource since then, in answering various questions on modeless dialogues and ensuring that the Revit application main window becomes the foreground window in certain situations. It demonstrates how we can combine several ubiquitously useful pieces of functionality that we already discussed in the past to implement a homogenous whole. We create an application which collects information from the Revit model and then displays it in a context that is pretty independent of Revit yet allows very close interaction with the Revit model.

This is the continuation and final instalment on the series on navigating through unconnected connectors in Revit MEP. So far, we covered the following topics:

After populating and displaying the data grid view, all that remains is to implement the interaction from it with Revit. The challenging aspect of this is the fact that the modeless form is not in a Revit API context, and the Revit API is not asynchronously accessible. As mentioned and as you can see from the last line of the implementation of the Execute method, we can work around that using the Idling event.

This actually shows that the challenge of driving Revit from outside can now be addressed pretty reliably and seamlessly, while it was not really solvable at all in prior releases.

Here is an overview of the complete functionality of the loose connectors sample:

Its implementation was originally triggered by the following question and suggestion from Martin Schmid:

I was wondering if there was a straight forward way to find all 'open' connections via the API?

Is there a generic way to get all 'Connectors' in a model, and then check if they are connected to another connector? Otherwise, I presume one would have to check all object instances that may have an MEP model, and check their Connector Manager for the connectors.

I think a sample that is able to find unconnected connectors (Duct, Pipe, Conduit, and Cable Tray) would be useful, because currently the UI doesn't provide a way to identify, for example, disconnected duct segments or fittings, etc.

A very nice to have additional feature would be to list all the unconnected elements and be able to click on a part to zoom to it in the Revit model, to step through the results. It would be most useful if you could zoom to part, fix the connection, then zoom to the next part. Not sure how practical that is because in many cases you'd have to switch views and the like, unless the 'results' could be modeless.

In addition to the main required functionality, the sample implements a couple of additional ones not directly related to its main functionality and are useful in many generic add-in development areas:

As you noticed, all these topics that I wanted to dive into makes it almost more work to document than to implement, which is why it has taken me a while to get around to finally completing this overview, and requiring it to be split up into several separate posts to keep them down to a reasonable and manageable size.

I already discussed one example of driving Revit from outside using the idling event to display a continuously updated webcam image on the face of a Revit building element. In that case, the webcam image update event triggered an update in the Revit model. In the current sample, the double click of the user triggers a reaction in Revit, so the interaction seems very snappy. I have yet another sample up my sleeve which also reacts to an external event which can be triggered either by user interaction or programmatically, by detecting when the last modified timestamp of an external file on disk is updated and then automatically importing changes and modifying the Revit model.

In those cases, however, the external event is actually not driving Revit directly. On the contrary, we are making use of the Revit Idling event which is polling, i.e. checking whether a certain flag or signal has been set by the external event, and then reacting to that.

The apparent snappiness of the reaction is due to the fact that the Idling event is triggered very frequently when Revit is not busy with other tasks, possibly hundreds of times per second.

So how can we use the Idling event to really drive Revit from outside, i.e. react immediately to a double click in our external modeless loose connector navigator form and react to that input within Revit through the Revit API?

So far, we discussed how to retrieve the MEP elements and connectors, determine the Revit parent window and attach a form to it, and populate and display the modeless form.

We set up Revit as the parent window of the modeless form, ensuring that it stays on top of Revit when Revit is visible, and also that it is minimised when the user minimises Revit.

Driving Revit From Outside Revisited

Now let's discuss how to drive Revit from the modeless form, which is technically outside of Revit, and does not have synchronous access to the Revit API.

The form is populated with the unconnected connectors, and our intention is for the user to double click on an element to zoom to it in Revit.

The double click event is handled by subscribing to the CellDoubleClick event of the data grid view, which is the only widget displayed by our form.

Once we are within a valid Revit API context, we can zoom to the desired element by calling the UIDocument ShowElements method.

The question is how to get from one to the other.

One possible answer is to post a message saying what to do in the double click event handler, and look out for it and react appropriately in the Idling event handler.

In the Idling event handler, we check the value of the pending element id. If it is zero, we have nothing to do. Otherwise, we can zoom to the respective element, and set it back to zero when we are done.

You already saw the code instantiating and displaying the modeless form, but may not have noticed that in addition to passing in the Revit widow handle to its Show method, we also passed in a delegate to the SetPendingElementId method in the constructor:

The LooseConnectorNavigator, derived from the System.Windows.Forms base class Form, stores the delegate in a local variable _set_id:

So let's look at the two event handlers.

In the Idling event handler, we first of all check whether we have anything to do at all. This check should be extremely quick, since the event handler may be called hundreds of times per second if Revit has nothing else to do. If the pending element id is non-zero, we wish to highlight and display it on the Revit screen.

So here is the final resulting implementation of the Revit Idling event handler. As said, whenever the user has selected an element to zoom to in the modeless dialogue, the pending element id is set. The event handler picks it up and zooms to it.

Since we are not modifying the Revit document in any way, there is no need to start a transaction.

The reaction to a double click is surprisingly snappy, if you know what is going on in the background. If you don't know there is nothing to indicate that the modeless form is not an integral part of Revit itself.

I showed the modeless form in the discussion on populating a data grid view:

Once a user clicks on one of the unconnected connectors listed in the form, Revit immediately zooms to it. In some cases, if the element is not visible in the current view, Revit will ask whether to search for another suitable view to display it in:

If the current view was suitable or a suitable one was found, the double clicked element is highlighted and zoomed in: 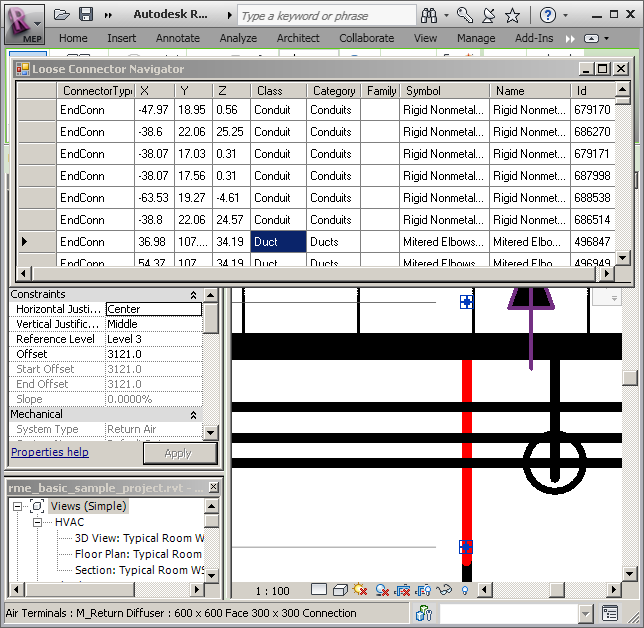 I hope you find this sample useful in your development work. As said, the response at the AEC DevCamp conference in Boston and the Waltham and Munich DevLabs was pretty enthusiastic.

Here is a slightly further cleaned up version of this sample, loose_connectors_6.zip, including the complete source code and Visual Studio solution.