We recently presented Saikat Bhattacharya's neat little object relationship analyser and displayer, implemented in C#. Yesterday I received a very friendly submission from Jose Guia saying "Thought I would share my code as well, ... I converted the project to VB for sharing."

I compiled his solution and it works fine for me. I did run into two little issues which were easy to solve, both of them involving namespaces:

I much prefer that approach, since it is similar to the syntax used in C#. However, when I tried to compile the code like that, it caused a number of errors like these (copy to an editor to see the full truncated lines):

The only way I found to resolve this was to remove the explicit import statements from the code and add global namespace importing requests to the project settings instead: 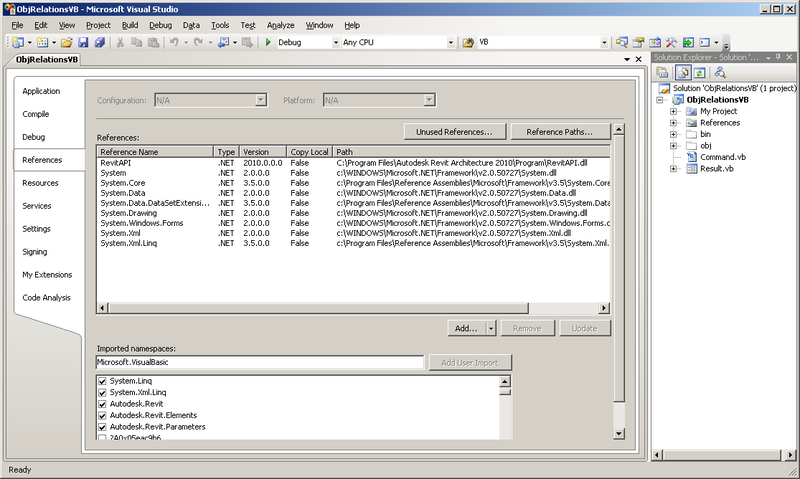 The global imports are defined at the bottom:

The second issue has to do with the exported namespace containing the external command. The VB code specifies the same export namespace as the C# version in the source code, ObjRel:

In spite of this, the Visual Studio environment surreptitiously prepends another namespace specified in the global project settings, the so-called root namespace, in this case ObjRelationsVB:

Therefore, the class name entry in Revit.ini needs to be different for the C# and VB versions:

Very many thanks to Jose for sharing this code!